A small-time 'wellness' Instagram influencer shared a viral post on the 'benefits' of bumhole sunbathing and seems like she is not the only one following this bizarre wellness trend. 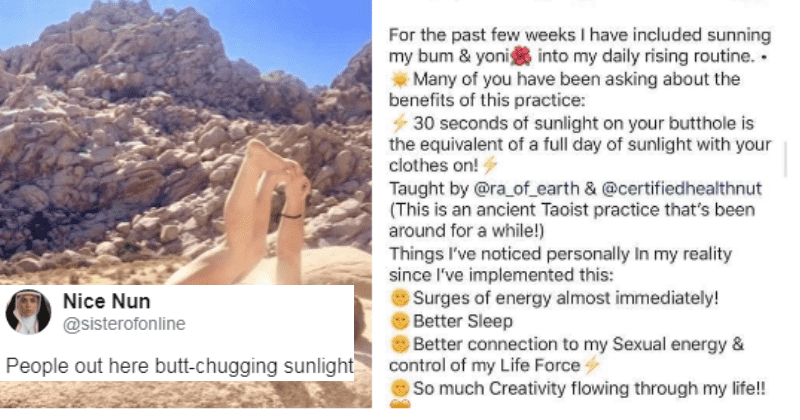 Looking to soak up some sunshine and Vitamin D?  Well, don't forget to add your butthole to the list of body parts that need to bathe in the sun. Well, that is if you believe Metaphysical Meagan's post on Instagram.

The influencer with over 13,000 followers shared a 'wellness' post, with her legs spread wide facing the sun in the nude... to let in the sunshine, quite literally.

In an Instagram post last month, she wrote: For the past few weeks I have included sunning my bum & yoni  into my daily rising routine. She claims that "30 seconds of sunlight on the perineum is equivalent to being in the sun all day with your clothes on" and that this was "an ancient Taoist practice that originated in the Far East." She also added that this is meant to be done only between 30 seconds and 5 minutes and is not meant to be a tanning technique.

She credits another 'healer' who goes by the name "ra_of_earth," for introducing her to the technique, according to Insider. He claims ailments like vaginal infections and hemorrhoids are "diseases of laziness" and can be prevented by "regular washing" and "exposure to sunlight."

Think only Instagram influencers believe in these techniques? A celebrity who swears by perineum sunning is actress  Shailene Woodley, according to a report by Yahoo.

"I was reading an article written by an herbalist I studied about yeast infections and other genital issues. She said there's nothing better than vitamin D," she said. "If you're feeling depleted, go in the sun for an hour and see how much energy you get. Or, if you live in a place that has heavy winters, when the sun finally comes out, spread your legs and get some sunshine."

If you're looking to try this flashy trend, perhaps check with your doctor before burning your bum? From what we gather there isn't enough evidence to support the benefits of perineum sunning.

Dr. Diana Gall from Doctor-4-U told Insider. "Yes, practicing mindfulness and meditation, and getting your dose of Vitamin D, is beneficial for mental and physical health, but you don't need to damage your skin in the process from sun exposure."

She said Vitamin D can be absorbed by one's skin safely while using sunblock, but exposing your skin directly is not worth the damage and can even increase the risk of skin cancer. "Practicing mindfulness comes in many different and safer forms, and there are no extra benefits of doing this naked in the sun," she said.

Shamir Patel, the founder of Chemist 4 U shared her expertise and said that while Vitamin D is essential for healthy bones, teeth, and muscles, there are far easier ways than "exposing your perineum to sunlight."

He also agreed there was no benefit to doing so. "While the healer is only promoting 30 seconds of irregular sun exposure, a sustained period of doing so, could lead to long term sun damage," he said. "I would suggest that going on a long walk in the sun is much more beneficial, and if you're in need of a boost, then taking a supplement is much more practical than perineum sunning."

But(t) perhaps, the best part of this bizarre trend is everyone's reaction to it. So here it is. Some of the best tweets on the trend of sunning one's bum:

Can someone please pass on to me the study showing that 30 seconds of butthole sunlight is equal to an entire day of non-butthole sunlight? Is this what my cat has been studying its entire life?

It really depends on who your neighbor is.

Please, it's an ancient Taoist practice. You know what Lao Tzu said: "A journey of ten thousand miles begins with [a single session of tanning your taint]."

For me not the funniest but definitely one of the whitest.

It's all fun and games until an eagle drops a tortoise into your crotch.

Just wait till Gwyneth Paltrow gets onto this idea.