The mum asked her child who made the observation to elaborate. 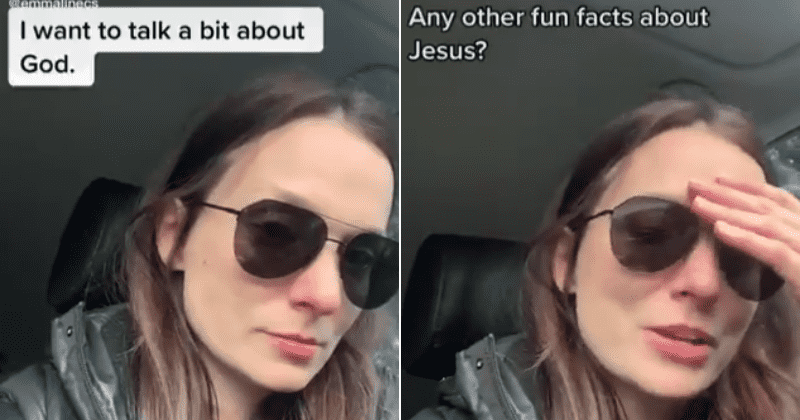 Sometimes kids say things that are so unexpected it leaves grown-ups pretty flabbergasted. While adults are the ones usually the ones to begin conversations about faith and religion, two Australian kids had a different take on the matter. Emmaline Carroll Southwell was recording her children talking to each other in the car but it wasn't about cartoons or toys. "I want to talk a bit about God," her son, Levi, began. "So everyone in the world loves him…but not me." The mom appears to be taken aback but waits to hear his reasoning.

You can watch the clip below:

This is the best shit I’ve seen in a while. 😂❤️ pic.twitter.com/0D2coy7XIR

Levi explains that he doesn’t love God because he doesn’t know very much about him. But whatever facts he does know, he started to lay them down. "We’re up to number one. So Violet, guess what?" he asks his sister. "What?" she questions." "He’s bi and non-binary," Levi states confidently. Suffice to say, their mother and by extension the viewers, were stunned. "Did they teach you that at school?" mom asks. "That is not true." Her son assures her that they did, but mom isn’t buying it. She prods further. "Why would you think Jesus is bi?" "Because he loves everyone in the world," Levi explains. How do you argue with that?

Emmaline decides to move on and asks why her son believes Jesus is non-binary. Her son replies matter-of-factly: "Because he wears a dress and he’s a man."

😅😂😂😂😅🤣🤣I love children. Their brains work in the most wonderful ways. They just gave mom a lifetime memory that she will cherish and talk about for the rest of her life

Their logic was sound

These kids understand bi and non-binary better than a lot of adults.😂

Many Twitter users were surprised at how young kids know such inclusive terms. MeAtMyself_ wrote: It’s the fact that a child knows the terms bi and non-binary. Of course, there were a bunch of critics. AmanaFreedman tweeted: If this is the type of reasoning they teach, and y’all approve, the world is definitely about to end. To which xdoublelex replied: relax. they’re doing better than any parent being homophobic or transphobic around their kids. the future is fine. 504_nights added: Protect that child at all costs.

While some people were shocked at the child's observations, many saw the sweet innocence to it. But what do you'll think of the little kid's observation?

My fav part was “Everybody loves him.. but not me! I don’t know much about him” 🙌🏽👏🏽👏🏽👏🏽 speak yo truth baby! pic.twitter.com/JepzISd1QS

I’m slick mad she interrupted. I wanted to see where this was going 😂

Lol they are words that describe people. Why can’t they know them?

I was like hold up Jesus not Bi... take that Blasphemy somewhere else... but then little One dropped the hammer and I was like pic.twitter.com/je84m3DR8B