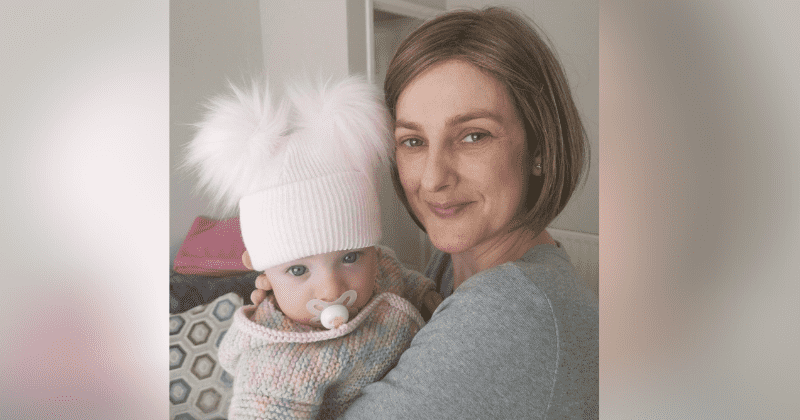 Gemma Collins from Cramlington, Northumberland, could not wait to be a mother. After going through several rounds of unsuccessful IVF treatment, she was beyond delighted to discover that she was finally pregnant in February last year. But her happiness lasted only so long. She started to fall ill at around the same time and was then given the devastating news: a 10cm tumour was discovered behind her heart, and she was diagnosed with a rare form of bone cancer sarcoma, reported Chronicle Live. As a result, she had to deliver her baby three months before the due date so she could start treatment.

On July 3, Collins delivered a premature baby girl weighing just a little more than one pound. She was then taken into treatment for her cancer. She had to go through a brutal six months of chemotherapy. Her family feared she wouldn’t make it as she contracted sepsis and suffered numerous complications. Both mother and daughter were fighting hard for survival. The two had to spend almost half a year apart but were finally reunited for Christmas. All seemed to be going well, but three weeks ago, Collins woke up to find that she was not able to move. An MRI scan revealed that there were new tumours in the back of Gemma's head this time.

Thirty-seven-year-old Collins had to start chemotherapy all over again. The tumor was located in a position that was hard to operate on. Collins had earlier stated that her worst fear is her daughter growing up without a mother. "It’s so hard when you’ve wanted something for so long, that life can be so cruel to take it away," she had said. Much to the shock of her family, her condition began to deteriorate over the past few weeks. "Gemma was very tired, very exhausted, and getting a little bit confused, and by Thursday I could see a terrible change in her," Collins' mother, Margaret Bateman, 61, told Chronicle Live.

The following day, her condition deteriorated completely and she passed away at Northumbria Specialist Emergency Care Hospital in Cramlington with her family around her. She left behind her 14-month old daughter, husband Anthony, and brothers Tony and Craig. Bateman said, "It's just devastating, absolutely devastating. Phoebe was her life, and Gemma was complete when she was born. It was what she was waiting for, and Phoebe is such a little miracle. We're so grateful to all the staff on Ward 35 at the Freeman Hospital, who treated Gemma's cancer. They did everything they possibly could for her." She was heartbroken by how everything seemed to happen so quickly.

Mother, 37, who had her IVF baby three months early so she could begin treatment for cancer dies less than a week after being told tumours had spread to her heart
via https://t.co/7Kl0OCajxX https://t.co/tirKRi5BsL

"They were going to operate on June 1 but couldn't because one of the tumors was too big. She had three lots of chemo and got the results of another scan last Monday. They said one of the tumors had grown on her heart and there another one at the front," Bateman explained. "She went into hospital at Cramlington and her organs were closing down. She tried and fought so much, but her body was so exhausted." Calling her daughter an inspiration, she said, "Nothing ever fazed her, and she did enjoy the time she had with Phoebe before the cancer came back."

She added, "Gemma was so easygoing, she had a heart of gold. She was always smiling, always happy. She was so gracious, right up until the end." Collins was married to her husband for five years. Just before she fell ill, Collins had started a job at NBT Group, before which she worked at Fenwicks for 18 years as a stock controller. Speaking of her daughter she had said, "She doesn’t look like a premature baby at all - she’s such a little character." Collins had then decided to take every day as it comes but sadly only got a to spend a few precious months with baby Phoebe.

The Sarcoma UK Support Line is open for anyone affected by sarcoma: patient, carer, family, friend, professional or just curious.