Mom Uses Simple Paper Trick To Teach Daughters Why Bullying Is Bad, And Every Kid Needs To See It

Diosa Chiqui tells her daughter and viewers that insulting someone and beating them down with hurtful words causes damage that is seldom repaired by a half-hearted "I'm sorry." 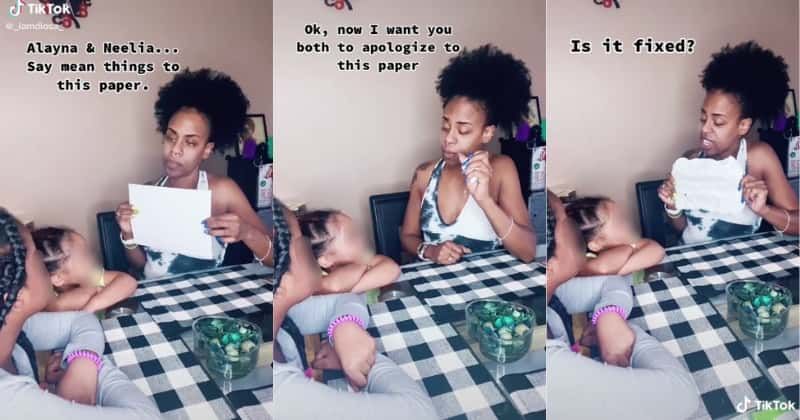 It's not often that a child confides in their parents that they are being bullied or not having many friends. While it's a parent's duty to let their kids know they can always come to them with anything, it is also their responsibility to guide them in a way that they know better than to be of distress to other children. Unfortunately, these moral lessons tend to fall on deaf ears more often than not. That's why the manner in which you convey these lessons holds immense importance. Life coach Diosa Chiqui seems to have cracked the secret in conveying an effective lesson on why children should not bully, and this has resonated with many across the world.

Chiqui, a mother of two young daughters, recently went viral after she shared a video of herself teaching her children the importance and reason for treating others with kindness, reports Yahoo! Life. The TikTok video begins with Chiqui holding up a piece of paper in front of her daughters Alayn and Neelia. Next, comes the instructions. "Say mean things to this paper," says Chiqui in the video which was posted on April 15. "You’re ugly," says one of her daughters. "You don’t have no friends," says another. "You’re fat!" continues the other. "That’s why your mom doesn’t love you," and "You smell like dog food!" were some of the insults hurled at the paper.

What caught everyone's attention wasn't the hurtful comments, but what their mother kept doing as the insults kept rolling. Every time the girls said something nasty, Chiqui would crumple the paper a little. This continued until the piece of paper turned into a tiny ball. Now, the young girls were asked to apologize to the piece of paper and as they began doing it, the paper unraveled little by little. But the fact remained that the paper was still a wrinkled mess. So, Chiqui questioned her daughters, "Is it fixed?" and the girls responded, "No." She then told them, "This is why you don’t bully."

It's hard to know what a person might be going through on the inside as they can be completely broken but appear perfectly fine on the outside. By using the crushed paper as strong imagery of what happens within a person when they are bullied, Chiqui explains the impact effectively. When you insult someone and beat them down with hurtful words, it causes damage that is seldom repaired by a half-hearted "I'm sorry." No matter how much you apologize to them, their heart and mind are never the same; just as the crushed paper that can never be restored to its original state. The powerful visualization provided by Chiqui ended up resonating with several people who thanked the mother for explaining the impact of bullying in the most simple yet effective way ever.

The video quickly racked up 2.8 million likes on TikTok. On Instagram, people praised the mom for sharing the easy-to-understand anti-bullying lesson. This is an amazing lesson! So simple for kids to understand. I will be doing this with my son and any future kids I may have, wrote user ambulurrrr. Another freespiritash_ noted: This 🙌 it’s beautiful I had to share with my children it’s the perfect example to show them so thank you. A third one chimed in: I don't know who you are? ...but I must tell you one thing that you are a great parent...❤️❤️❤️ . And you have taught me really a grttt way to teach kids how to be away from doing such negative things....❤️❤️❤️❤️🙌🙌🙌🙌👏👏👏👏👏. Finally, an Instagrammer stated: This is fantastic! A brilliant way to demonstrate the harm bullying does!