The teenage son father told her that it "was not a fair punishment because 'impressions matter' and it will affect the rest of his life." 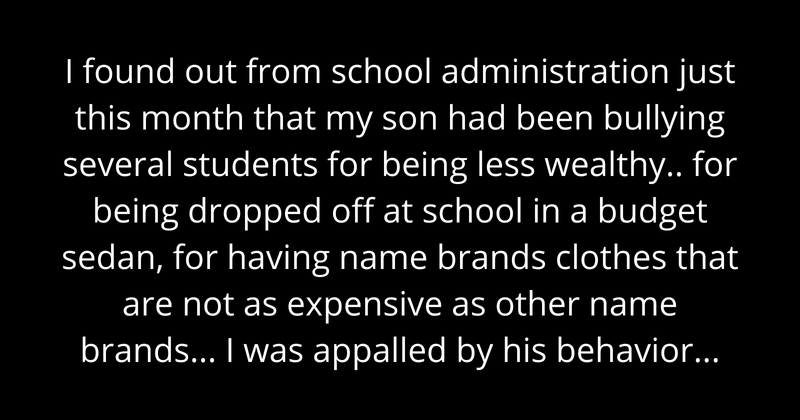 Bullying in schools has become a rampant problem. They bullied often end up getting depressed and sometimes even die by suicide. While schools should take appropriate action, it doesn't necessarily happen always. It is imperative that parents also keep an eye on their child's bullying tendencies, so they can nip it in the bud early on like this parent who found that her son was a bully. He would pick on his classmates for being "less wealthy." So, she decided to teach him a lesson. She took to Reddit's AITA (AmITheA**hole) group, to recount the story, and ask fellow Redditors if she was in the wrong. The single parent noted that his father who is "extremely wealthy" who only provides child support and is an absent father. She added that she too "works in tech and is pretty well off."  She wrote: The court order for child support is enough to pay for the best for my son. He goes to a fairly competitive private school, is in a lot of extracurriculars that cost a decent bit, etc...

Yet despite coming from an affluent background, her teenage son was being a brat. When the school administration brought it to her notice, she was horrified by her son's behavior. She said: I found out from school administration just this month that my son had been bullying several students for being less wealthy.. for being dropped off at school in a budget sedan, for having name brands clothes that are not as expensive as other name brands... I was appalled by his behavior. After hearing about this, she had a talk with her son and told him in no uncertain terms that his behavior was unacceptable. She continued: I had a talk with him about how this was wrong, and also about how it's not something that he should have any personal pride in. He has no job, no savings, no investments, no wealth of his own. By totally random chance he happened to be born into good circumstances. And that's it.

Together with the school, they decided that her son would apologize to his peers for bullying them. She also took it up a notch to drive home the point to him by taking away his privileges that he took for granted. She stated: I also decided that this year, we're thrift shopping for clothes. No more brand-name sneakers or clothes.And rather than driving him to school and activities in the porche or the jaguar, I'm driving him everywhere in my '92 jeep that was one of my first cars that i mostly keep around for nostalgia and off roading. It's really beaten up, I've rolled it, taken off the doors, tried to fix the paint with rattle cans at one point lol (young and dumb at that point)And for any activities he joins, he can borrow club equipment instead of getting his own bought.

Her son wasn't pleased with these changes and complained to his mom that it was "embarrassing to pretend to be poor." She added: He was really upset about it all, especially being driven to school and activities in the Jeep. He said that it was causing problems with his friends, he was looking bad at school, his friends parents didn't want their kids getting in such an old vehicle with no doors. He also said that it was embarrassing him for me to pretend he's poor. Furthermore, the absent dad was also upset with his son's punishment, because it was reflecting poorly on him. She noted: His dad, who overall has been very absent, got upset with me because apparently word had gotten around his circles that his son was being driven around town in "a junker" and that I was making him use the club gear for sports instead of his own. And that was not a fair punishment because "impressions matter" and it will affect the rest of his life"

Therefore, the single mother was in a quandry and wanted to know if she was in the wrong. However, most Redditors were unanimous in her decision and praised her for doing so. Fuktequila wrote: You are teaching him a valuable lesson for the rest of his life. It’s never okay to make fun of someone based on their families level of income In summary this is a great punishment that might help him see things from other peoples point of view. Another named tropical_tundra_added:  This. A thousand times this. Also, THANK YOU!!! I wish there were more parents like you.