Mom Switches Out Baby To Prank Husband And Freaks Him Out

Kat Stickler tried the prank on her husband by switching their baby with a friend's baby but failed. 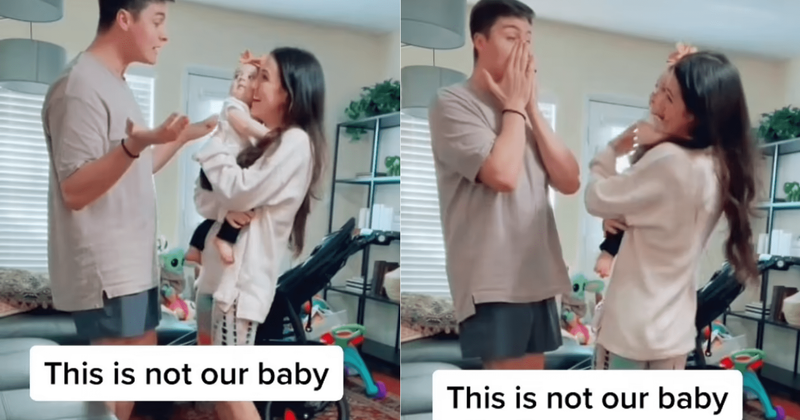 Since the arrival of social media, pranking has gone from being a joke activity to a legitimate career option for many. You can find millions of random pranks on TikTok, but while the majority makes you cringe, there are genuinely others that will keep you engrossed till the end. This is the case with a recent video shared by TikTok mom Kat Stickler, who pulled a prank on her husband Mike by switching their daughter with another baby to see how long he would take to notice it, reports DailyMail.

Though the clip was initially shared in December, it still continues to do the rounds on the platform even now. As the video begins, we see the mom tell her viewers that she's going to prank her partner and show her baby daughter, MK, and the baby she will do the switcheroo with, who's dressed in identical clothing. Then she brings the new baby into the living room and calmly asks her husband to take her out of the stroller. But, being the involved father that he is, Mr. Stickler instantly catches on that something isn't quite right. "This is not our baby!", he tells his wife, after taking a good look at the baby for a few seconds.

"What are you ... ? This is not our baby!" he points out yet again, as he approaches the stroller for a better look before scooping her up and holding her, while still trying to process whatever's happening. Millions of questions seem to go through the man's head, all of which seemingly questioning his wife's sanity. "Katherine, this is not our baby, this is not funny!" he shouts. "Where's MK?" Unable to keep her straight face any longer, Stickler admits that this was all indeed a prank. "I'm pranking you, I'm sorry!" she tells her husband as she returns to the room and takes the baby from him. After what's only a failed 30-second prank, Mike has several questions such as where their child is and where she got the baby stranger from?

Stickler then proceeds to spill the beans that she was in fact a decoy baby belonging to her friend and that their daughter is in the other room. The husband seems to calm down after admitting that his heart was pounding in his chest thinking she had just lost their baby. Their followers, however, were thoroughly entertained with the video with many even leaving comments about how quick the dad was in spotting that the baby wasn't his. A user wrote: "I love that his first instinct is to pick her up and protect her. Like he thought his kid is missing and still [thought]: "Oh this poor other baby though!"' Another added: "'I'm confused [about] people acting so surprised that he was so caring for another baby. What else were people expecting?'"

A third user commented: "I love that he still picked her up and held the baby even though it wasn't his cause someone still needs to take care of the imposter baby."  To date, the video has over 11.9 million views and over 1.9 million likes. As to their story at the moment, the couple has announced that they are separating and are sharing clips on the platform on how they are trying to co-parent their one-year-old daughter while living apart.

Wife pulls the old switcheroo on her husband - with their BABY https://t.co/zopoq2B4fn via @Femail #babies #donttrythisathome