The product called the Buggie Huggie has made grocery shopping less stressful for parents knowing that their toddlers are secure and safe. 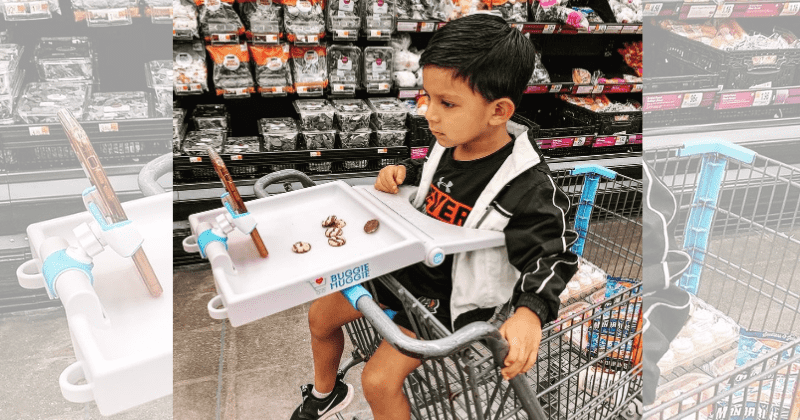 Going shopping with a toddler can be quite a nightmare. While you try and keep them in your shopping trolleys, their restlessness could get the better of them. There have been many cases of kids falling off their trolleys leading to serious injuries. Mother of three, Nichole Clark faced the same problem every time she would go to a store with her kids. She knew she had to find a solution and worked on a chair tray that could be easily attached to trolleys. Her husband, Clark, and father-in-law helped her in the effort. Mothers would come to her in stores and ask her where she got the chair tray from. That's when the stay-at-home mom realized that her invention could be turned into something much bigger - a full-fledged product. She went to the drawing board and worked to perfect the product further. And thus her company Buggie Huggie was born.

Speaking to Good Morning America, she said, getting her middle child named Jonah into a shopping cart would end up being a "wrestling match." She added, "Then it would take just three seconds for him to lean out and reach for something, or I could turn my head and he was already one leg out (of the cart)." Her child fell out of the trolley three times and hit his head and she decided it was time to do something. "I just had this idea: What if we had something that went around him that would keep him safe inside the cart? I thought if there was a tray that fit around him, and then he had place for his snacks and I could put some toys out for him to be entertained." Once she started using the chair tray designed by her she got the attention of a number of parents.

"As moms you take on this guilt, like you're the only one with this problem, that you're the only one who can't corral your kid," she added, "The more I went out the more I realized that other moms had this problem ... other moms would stop me and say, 'Where did you get this?'" Around two years after the initial Buggie Huggie product, she and her husband launched their company. "Immediately when a mom sees the product, they get it. I've had that expectation all along, that this will bring peace to moms and will bring safety to kids," she said. The product comes at a price of $39.95 and can go around a child in a trolley and clipped onto the shopping cart. Children of 50 pounds can be fitted with the tray chair. It also has a phone holder. It can also be carried into a diaper bag.

Clark and her husband also raised funds through the crowdfunding website, Kickstarter. As of November 24, as many as 329 "backers" have pledged $25,226 to Clark's product. And the product has received some very glowing reviews. One parent named Crystal R, wrote on the company website, "With four kids I have seen all of the unique ways that kids can get out of sitting down in the cart at the grocery store. They wiggle, scream, throw fits, and negotiate, but since we've gotten the Buggie Huggie, my youngest is happily content to sit and play with his toys or eat his snacks while I shop in peace."

Another named Bianca T wrote: "Having to take two toddler boys grocery shopping is already stressful as it is, but using the Buggie Huggie has made grocery shopping less stressful knowing that both boys are secure and safe! All I have to do is pack some snacks, and a toy or two, and we are all ready to shop in peace."