The 31-year-old mother said she wants to help continue the family tradition of taking children along during hunting trips. 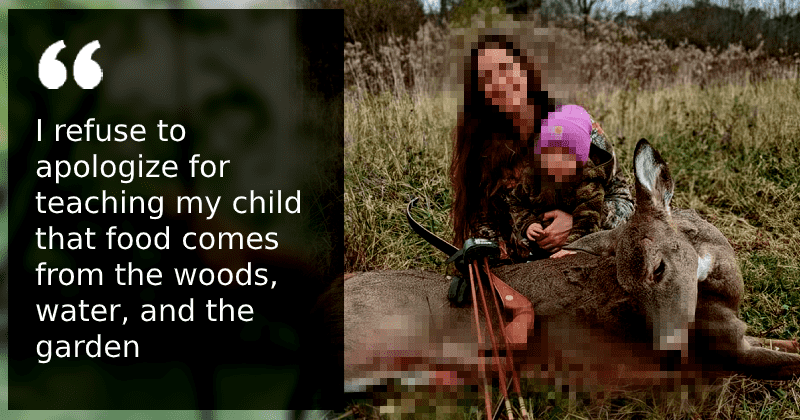 The mother of a 2-year-old baby is facing a huge backlash for taking the toddler along on her hunting trips. The stay-at-home mom, Beka Garris, 31, enjoys hunting and wanted to share her passion with her young daughter, Isabella, but faced criticism after she posted pictures on Instagram. Garris isn't too bothered by criticism and believes she's just teaching her baby what her father taught her. Hunting is legal in many states in the United States. She is also known to often post pictures of dead animals and has been pictured carrying her toddler around while hunting. Garris wants to "normalize" killing and is encouraging other parents to do the same as well. Garris often hunts rabbits and deer. The Ohio woman often sets out early in the morning hoping to bring home a 200-pound whitetail deer to feed the family, reports the Daily Mail.

She has been slammed and labeled a "bad mother" for exposing her daughter to hunting at the tender age of two. Garris argues that it's her choice, as it is for every parent to decide how they want to bring up their child. "Every parent has the choice to raise their children how they see fit," she said, noting that she was only continuing the family tradition. "Hunting with children of all ages is something our ancestors did all of the time. It's not something that should be seen as shocking. I choose to ignore what people say. We love spending time in the outdoors learning about nature," Garris added.

Garris said hunting was part of her life while growing up. "My dad is an avid hunter and so he started taking me along when I was ten. Hunting and fishing became a huge part of my childhood," she said. She said she likes to keep her hunts short when she goes out with her daughter. Garris said she takes her baby along only if the weather is favorable. She also believes it'll help her daughter appreciate nature more. "Exposing a child to the outdoors and hunting at a young age will only help them create a stronger bond with nature. They will be raised thinking these activities are normal – as it should be," said Garris. "I refuse to apologize for teaching my child that food comes from the woods, water, and the garden," she added.

For Garris, hunting isn't just a leisure activity but also food. She argues that wild game is better for your health than shop-bought meat. Garris said hunting also helps conservation through population control. "It's nice knowing where your food comes from and knowing the time and effort I put into the hunt brings a certain satisfaction," she states. The 31-year-old mother said they use all parts of the animals. While the family consumes the meat, the bones are used to create art while feathers and the hide often become clothing or wall hangings. "Some people may not understand displaying what we kill in our home but this shows respect to the animal. By creating something you can look at and remember, you get to appreciate its beauty," said Garris.

She has great memories of her hunting trips, even unsuccessful ones, and is hoping she can inspire other parents to take their children along as well. "What I would like to become is a role model for young women and new hunters. I hunt every day I can. I abide by the laws and strongly believe in the ethics of hunting. I love to cook and eat the game I harvest," wrote Garris, in a blog. "The hunting industry is no longer a man’s world. I plan to portray women hunters across the world as strong and independent. It’s ok to be a girl, yet be tough."