trending celebrity people lifestyle news animals
A Boy Snapped Her Daughter's Bra, But School Asked The Mom And Daughter To Apologize To Him

A Boy Snapped Her Daughter's Bra, But School Asked The Mom And Daughter To Apologize To Him

Her daughter had punched the boy and the school, instead of hauling up the boy for his actions, was expecting an apology from the mother and the girl. 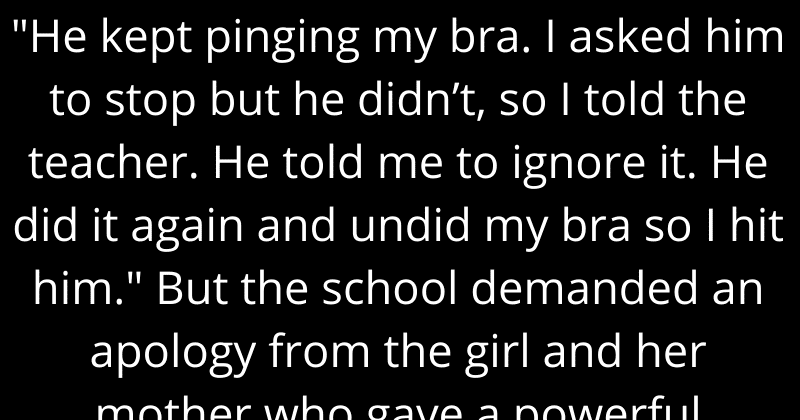 Women are subjected to all kinds of harassment since the time they are children. A lot of these are usually brushed aside as trivial and playful things that kids do, leading to the normalization of such behavior. One mother recounted how she stepped in when her daughter was being troubled by a male classmate.

The boy had been regularly pulling her daughter's bra strap in class and despite repeated pleas to stop, he just would not listen. The daughter even informed her male teacher but the daft man asked her to "ignore" what was happening. Pushed to a corner,  the girl punched him. Twice.

Her mother was called in over the storm created by her daughter punching the boy. Yes, the issue became about the punch and not the fact that he was harassing her. The mother who works as an A&E nurse was called urgently to the school and was not even allowed to complete her shift. At the school, she was taken to the school head’s office where she saw her daughter along with a number of other staffers including the headmaster and the boy. The boy had "blood around his nose and a red face". His parents were present as well.

She wrote, "I got the impression they were more angry with my daughter than the boy" and were probably expecting an apology from not just the daughter but also the mother.

To their surprise, the mother said she was probably going to "press charges against him (the boy) for sexually assaulting my daughter and against the school for allowing him to do it?”

Some of the staff had the audacity to tell her it was "it was not that serious" and asked everyone not to "overreact." However, the mother pointed out that all of them were missing the point. Then it was her daughter's turn to speak. She said her classmate "kept pinging my bra. I asked him to stop but he didn’t, so I told Mr. (teacher). He told me to ‘ignore it.’ (boy) did it again and undid my bra so I hit him. Then he stopped.”

The mother then turned to the male teacher and gave him a piece of her mind. “You let him do this? Why didn’t you stop him? Come over here and let me touch the front of your trousers” she said and added, "Does that seem inappropriate to you?"

She was not done yet and asked the teacher if he would pull the bra of another female staff member who was in the room and "see how fun it is for her. Or on that boy’s mum’s bra. Or mine. You think just because they’re kids it’s fun?"

Still missing the point, they pointed out that her daughter had beaten the boy. The mother responded to that charged with: “No. She defended herself against a sexual attack from another pupil. Look at them; he’s nearly 6 feet and 11 or 12 stone. She’s 5 feet and 6 stone. He’s a foot taller than her and twice as heavy. How many times should she have let him touch her? If the person who was supposed to help and protect her in a classroom couldn’t be bothered what should she have done? He pulled her bra so hard it came undone."

She warned the boy and told him if he tried his horrid antics on his daughter again, she would press for sexual harassment charges in all seriousness. She also told the school if any such incidents persist they would regret it. The mother filed a complaint with the governors of the school and the higher-ups. Her daughter was also put in a different class for that subject, away from the boy and the teacher.