Mom Poses As 13-Year-Old Daughter For Almost A Full Day Of School To Prove A Point, Gets Arrested

The 30-year-old recorded her experience and shared the footage on social media. 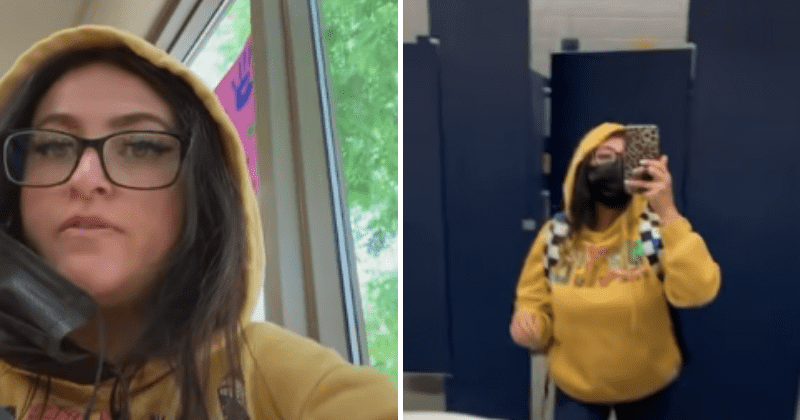 A Texas mom decided to prove a point by dressing up as her 13-year-old daughter for almost an entire day of school at San Elizario Independent School District. Casey Garcia, who is 4 feet, 11 inches tall and weighs 105 pounds, recorded the experience and filmed herself going to classes dressed in a yellow Marvel hoodie, skinny jeans, glasses, and a black medical mask. Garcia was later arrested as the San Elizario Independent School District told cops that an adult was trespassing on school grounds and posing as a student, according to a news release from the El Paso County Sheriff's Office, reports PEOPLE.

So why would a 30-year-old pose as her kid and share her experience on social media? The video posted by the Texas mom starts with Garcia in the school bathroom, then we get a time-lapse video of her transformation. As she's walking into the school she said: "Do I look like a seventh-grader? No? Cool. Awesome." During the school day, she can be seen going to all her classes and interacting with all her teachers, and even having lunch. It is only towards the end of the video, Garcia said that she "finally got caught" and was turning herself into the principal.

In a follow-up video, Garcia claimed that faculty members were more bothered about her cellphone usage than checking her identity. Garcia said the whole stunt was for a "social experiment" to show a lack of security at schools, especially when it came to mass shootings. "We need better security at our schools," Garcia said. "This is what I tried to prove. I don't mean to be curt, but I kind of feel like I proved it." She added, "Are you more concerned that I, a parent, was sitting next to your child or do we really want to wait for the next person taking their second amendment right to the extreme?" While Garcia apologized for getting the school district, and acknowledged that her actions may be "weird" to some people. She said that it was important to help shine a light on the vulnerability of students. "I did this to prove a point. I proved I could get through the public school system," she said.

The mom's stunt got mixed reviews. Some people applauded her experiment. MsWest311 wrote: Props to her & she proved her point Security at her daughters school is nonexistent! That could’ve been any grown up there to do harm to a student or students & the staff & “security” CLEARLY wouldn’t have known. Other Twitter users, however, began to point the flaw in the mom's plan. Pamela29405948 tweeted: I get it but she could've proved her point in a different way. keithL34093842 elaborated: Now she will be upset when the school has massive security like a prison because she had to make a tiktok.

After being taken into custody and being charged with criminal trespass and tampering with government records, the mom was released from the El Paso County Detention Facility after posting a $7,908 bond, according to online jail records. In a statement provided to PEOPLE, San Elizario Independent School District Superintendent Jeannie Meza-Chavez said that "security measures are being reviewed and evaluated not only at the school where the incident occurred but all schools and facilities in the district." "While there was a breach in security, all of our students are safe. An individual associated as a parent with the school was involved in the incident and posted a video regarding the situation," Meza-Chavez said. "Teachers, staff, and administrators in San Elizario ISD will continue to work hard to provide the very best learning environment for students," the statement read. "We are equally committed to continuing to improve all safety measures and protocols. "

Seriously? Social experiment? You buying it?Texas Mom Arrested After Posing as 13-Year-Old Daughter in School: 'I Did It to Prove a Point' https://t.co/8eC4Pc60G5