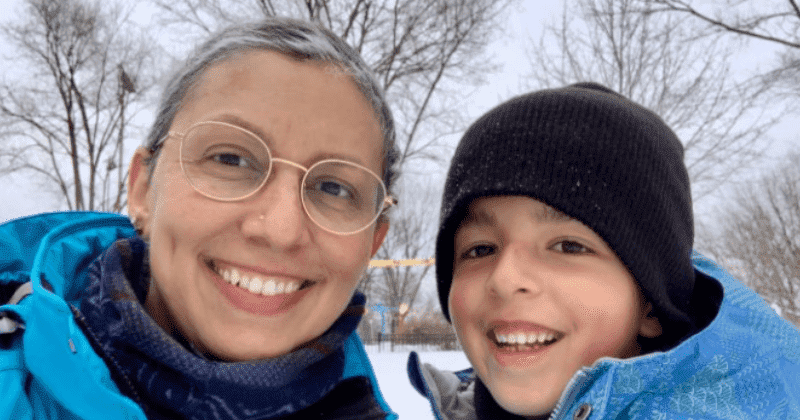 For over a year now, Dr. Nadia Chaudhri has been battling stage-3 ovarian cancer, undergoing a hysterectomy and several rounds of chemotherapy to hopefully get rid of the illness. Unfortunately, things didn't work out as expected. Earlier this month, the Montreal-based neuroscientist was hospitalized again and she received confirmation that the terrible illness had returned. "Once ovarian cancer returns, it’s considered a terminal diagnosis," Chaudhri told Good Morning America. "There is no treatment. You’re just buying time."

💔❤️I don’t know you. I thank you for sharing and wish you ALL of the strength, Nadia.

Last week, Chaudhri posted a heartbreaking photo of herself with her six-year-old son on Twitter and wrote: "Today is the day I tell [him] that I’m dying of cancer. It’s reached a point where he has to hear it from me," she continued. "Let all my tears flow now so that I can be brave this afternoon. Let me howl with grief now so that I can comfort him." So far, the photo has gathered more than half a million likes and nearly 45k retweets as people came together to herald the mom's bravery and strength during a tough situation. Speaking of the circumstance that led her to come clean with her son, she said: "My husband and I made the decision that we needed to tell our son what is going on because all the treatments are failing me. He already knew that I had cancer. He knew that I was still taking chemotherapy medication and trying to get better, but I don’t think he had a sense of how bad it is."

Today Is the day I tell my son that I’m dying from cancer. It’s reached a point where he has to hear it from me. Let all my tears flow now so that I can be brave this afternoon. Let me howl with grief now so that I can comfort him. pic.twitter.com/PDgy8qbTIL

The 43-year-old said she planned to reveal on Tuesday, May 11 but woke up feeling "completely devastated". Seeking an outlet to air her grief, the mother shared her heart-breaking tale on Twitter, hoping a few friends and family would respond. But, never in her wildest dreams did she expect such an overwhelming response. "It really seemed to strike a nerve," she told GMA. "A lot of people have written to me unsolicited and told me how important it was that their parents had that conversation and they assured me how they turned out fine, or they told me about situations where they didn’t have the conversation and how dreadful that was."

I'm overwhelmed by the response to this tweet, which I wrote while howling in bed. Since you're here, I am raising funds to support underrepresented scholars in my field. If you'd like to help me make my fundraising goal that would make my❤️swell.https://t.co/Ie0Nu27rMV

So far, Chaudhri has received nearly 20k responses where people shared their own stories, consoled her, and encouraged her to be strong for her family. One user wrote: "My mother was this honest with me about her cancer when I was your son's age. Her honesty and courage have had a lasting effect on me and those around her." Another user had a poignant suggestion that would allow Chaudhri to continue to remain in her son's life long after she goes. "Make videos for his future special days (graduations, weddings, first job, first break up) so he’ll be able to continue to feel your love, wisdom, sympathy, and pride," they wrote. "Set up an email address for him, journal to him, and provide him the UN&PW during one of your videos." The idea was so well-received more than 38k people went on to like it.

As a daughter whose mom died of cancer when I was 12 and she was 40, I offer this: this is harder for you than it is for him. He will not fully understand what is shared simply bc of his youth and his lack of awareness about what death truly means. You don't have to be brave...

A day later, Chaudhri posted an update of what happened after she broke the news to him and shared a photo of her embracing her son as they unburdened their grief. "Our hearts broke," she wrote. "We cried a lot. And then the healing began." She continued: "My son is brave. He is bright. He will be okay. And I will watch him grow from wherever I am. Today was the hardest day of my life," she added, before thanking everyone for their love and support. The sudden popularity her story received has also enabled Choudhri to start a GoFundMe campaign to raise money to allow young scientists to be able to continue the research she was doing on drug addiction. The campaign has thus far raised close to $190,000.

Our hearts broke. We cried a lot. And then the healing began. My son is brave. He is bright. He will be okay. And I will watch him grow from wherever I am. Today was the hardest day of my life. Thank you for all for your love. pic.twitter.com/sCZFW9d8T5