Betty Strachan from Brisbane, Australia, decided to take it on herself to better represent a demographic that is never really accurately represented. 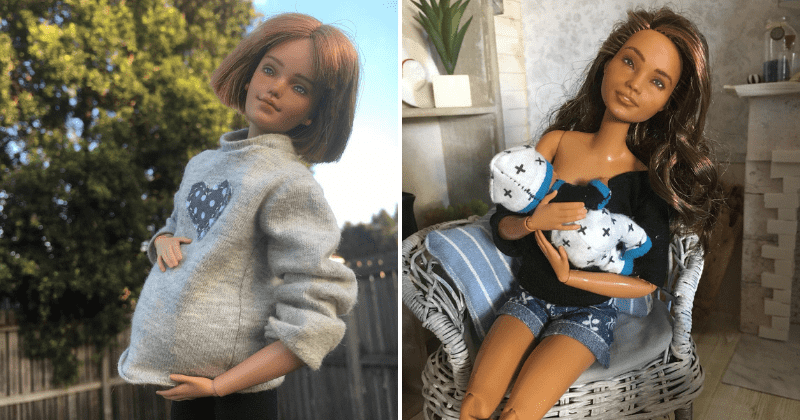 Barbie dolls have been a part of a lot of young girl's lives. The plastic doll may have not had the best impact on us as children, with unrealistic body structures, causing body image issues, in addition to further hammering in gender roles. But this was proof that the dolls, which were only meant to be played with, did have a bigger impact on us than imagined. Mattel, the company that makes Barbie dolls, has only recently started making more diverse dolls to include more races and body types. They even release limited-edition dolls of successful women in various fields.

One type of Barbie that Mattel does not manufacture is realistic-looking mommy Barbies. So this mom of three, Betty Strachan from Brisbane, Australia, decided to take it on herself to better represent a demographic that is never really accurately represented. Moreover, she wanted to find a way to normalize breastfeeding in public since it was such a normal part of motherhood but was still stigmatized and sexualized. Especially since she had herself faced discrimination for nursing in public. So the talented 28-year-old went on to create breastfeeding Barbies to show how nursing is just a typical part of life, reported PEOPLE.

At the time, Strachan had two kids, sons aged three and five. It was in 2016 that she first made the breastfeeding mother doll that she called, “Mamas Worldwide Barbie.” Speaking to The Huffington Post she said, "The decision to make a breastfeeding doll didn’t come consciously. I’m a member of a mothers’ group that’s comprised of very lovely and supportive women. I remember one day, I was drawing the new face on a Barbie doll, and she just seemed to be the embodiment of the entire group." After she had her sons, one of her hobbies was to repaint dolls, which has now turned into a full-fledged business.

“So I mimicked the positioning of a latched baby with an old figurine I had and called her the ‘Mamas Worldwide Barbie,’” she said. Her mommy dolls have realistic-looking expressions of exhaustion that many new mothers wear. She even made pregnant Barbie dolls with accurate baby bumps to highlight the pregnant life. She got a nod of approval from moms who thought it would be a great way to teach their kids about pregnancy and nursing. “Everyone in my mother’s group thought it was great, so I posted her on my Instagram page,” Strachan explained.

She then started getting requests to make more. "I realized that it was really something that should be available ― because, like most things that society deems unacceptable, educating children is the way to erase the stigma behind it," she said. She even has an Etsy shop where she takes custom orders. But she has just had her third child and has decided to take things slow on the business end. "Those who are here for breastfeeding/family dolls, I will still be producing those. They'll be listed as I make them as diverse as I’m able, however, there will be a few limitations due to the lack of availability of materials," she wrote on her shop page.

“Like a lot of young mothers, I was already conditioned to believe that breastfeeding in public was something to be ashamed of and shied away from doing so in public,” Strachan said. “I remember one occasion when I was out shopping with friends and my oldest who was about two weeks old at the time became fussy. The shopping center we were in was very busy and the parents’ room they reserve for taking care of babies was too full to sit and feed there, so I was left with no other option but to do it standing in the secluded corner of a store. Even then, the disgusted looks I received from passers-by were quite jarring and marred the experience for me.”