trending celebrity people lifestyle news animals
Mom-Of-Four "Played Dead" After Boyfriend Tried To Strangle Her: "You're Not Getting Away From Me"

Mom-Of-Four "Played Dead" After Boyfriend Tried To Strangle Her: "You're Not Getting Away From Me"

Her attorney recalled the details of the terrifying incident in court 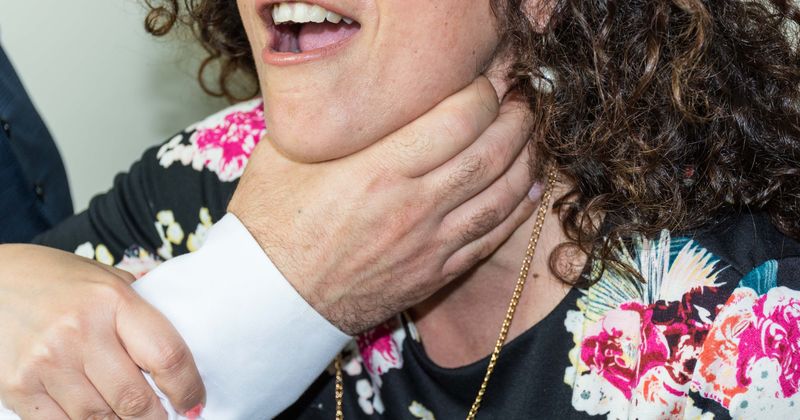 Trigger Warning: This story contains details of domestic violence that may be disturbing to readers.

What started off as a question, quickly escalated into an all-out abuse terrifying the victim so much, that she had to pretend to be dead just so she could stay alive. Ira Rose, 37, was at home with his partner of three years, watching TV, when the woman confronted him about some photos on his phone. According to Liverpool Echo, prosecutor Charlotte Kenny said that Rose attacked his partner after she asked about the "photographs found on the defendant's phone" and "trustworthiness." The victim who chose to remain anonymous said in a statement that Rose began "shouting over her" and she "asked him to quieten down as her children were in bed." Enraged, Rose demanded that she "Shut the f*** up."

Possessive boyfriend strangled terrified mum-of-four until she pretended to be dead#IraRosehttps://t.co/ln3iuaZxWs

The woman has four children, but Kenny says they are unsure how many kids were at home during the fight reports the Mirror. When Rose pointed at the victim with both his hands, she immediately pushed it out of the way, Kenny said. However, this made Rose angry violent. Kenny said that Rose "grabbed hold of both her arms, picked her up and threw her to the sofa." Not done with her, his violent streak continued. He then "grabbed her by the throat" and she "subsequently ended up on the floor" as she "tried to fight him off." With his vice-like grip on her throat, the woman attempted to explain to him that her daughter was upstairs in the room.

Sentenced to 1 year 10 months imprisonment. For almost killing her. And he has previous convictions for violence. So he will be out in 11 months. When will courts take domestic violence seriously?

As his grip tightened around her throat, he repeatedly told the woman to "go to sleep," and menacingly added that she was all his and that she wouldn't get away from him.  Unable to breathe, Kenny said the victim went into "blind panic" and was so scared that she "played dead so the defendant would think he had killed her." To make sure that she was really dead, Rose checked on her thrice and each time she held her breath. "At one point he poured himself a drink and pulled, or dragged, her by the ankles as if she was dead," added Kenny.

More animalistic behaviour from a savage.

When Rose lit the stove to smoke a cigarette, the victim used this opportunity to escape. She "ran out into the street" and called the police. She then realized that her children were at home and so she returned. When she got back, Rose told her "I guess you phoned the police then" and sat on a wall outside and she "secured the door with the chain." Kenny said, "The defendant was found outside and cooperated with police during the course of his subsequent arrest and admitted the offense."

Such perpetrators should never be forgiven. He has already done the damage.

This is not the first offense against Rose. He was charged with wounding with intent, aggravated burglary, and common assault back in 2007. He also admitted to causing bodily harm to the victim last year in March.  Matthew O'Neill, Rose's lawyer, denied that his client had committed any of the crimes prior to this incident. "It appears he was making good progress under the terms of the license." O'Neill acknowledged that Rose has "underlying anger problems" which haven't been addressed noting that"he knows ultimately that is his own responsibility." "Until he addresses these problems there will always be the potential of harm moving forwards."

It was absolutely horrific.

He said, "Until he addresses these problems there will always be the potential of harm moving forward. He tells me he himself was subject to a violent upbringing by his father and unfortunately violence breeds violence." Judge Anil Murray who jailed him for 22 months said that this a terrifying and serious incident." With this sentencing, Rose, from Princethorpe Road, Birmingham, can only be released when a parole board considers his risk safe to manage in a community.

I hope all abusers have a die day, you’re all horrible human beings