The nine-year-old's mom was concerned she may have crossed a line by punishing her daughter by denying her food. 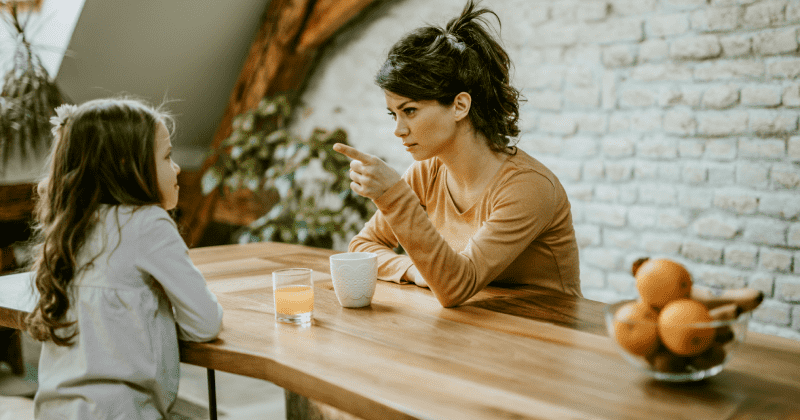 Is there a right way to parent kids? Is punishment an acceptable form of parenting or is it better to try positive reaffirmations? One concerned mom turned to Reddit after she disciplined her daughter and wondered if she may have crossed a line. It all started after returning home after a long day at the hospital. She decided to cook for the family and knew everyone would love it but things didn't go according to plan. "Evelyn is 9, and she’s been testing boundaries lately. My husband and I do not spank, we do time outs, take away privileges, and talk things through," wrote the woman. "Lately, she has begun saying rude, insulting things out of the blue. These comments range from critiques on clothing to criticisms of weight or other physical features. Absolutely rude statements that my husband and I would never say about anyone, ever. We urge her to think before she speaks next time," she noted.

"Tonight I got home from work early and decided to cook dinner and let my husband sleep in (he works nights and usually cooks dinner due to our schedules). I made beef stew from scratch. Nothing fancy, but we all enjoy it. I seasoned it as I always do, with salt, pepper, thyme, and a bay leaf. My husband woke up to the smell of stew cooking, and he was so happy about the surprise. Evelyn even said it smelled good," the mom said. "Then we began to eat. It was good, tasted just like always. My husband complimented it. Then Evelyn chimed in. “No offense Mom, but this stew is really bitter. Maybe next time only use half a bay leaf," she wrote. It was one thing to insult her cooking, but to do it after a long day's work. What's worse is that the beef stew wasn't bitter.

"I stared at her for a good 10 seconds, my jaw on the floor. I had just worked a 12-hour shift at the hospital and come home to cook her dinner from scratch, only to have her insult my cooking. I honestly wasn’t sure how to react. I was hurt and angry, but I don’t like to raise my voice. The thing is, if the stew really was bitter, I would have laughed about it, and told her that bay leaves don’t make things bitter. But the stew wasn’t bitter. My husband agrees, it tasted completely normal," wrote the woman, before adding, "So when I was finally able to respond, I quietly said, 'If you don’t like the stew, you don’t have to eat it. Please take your bowl to the kitchen and get in the bath. You may eat breakfast in the morning.'" Evelyn ran to her room and started sobbing.

"My husband thinks maybe I went too far. I was hoping that maybe the discomfort of going hungry for one night will remind her to watch her words in the future. What if she had said this to my elderly mother instead of me? Taking away the meal she insulted seemed like a fitting way to help her understand, but did I go too far?" she asked. Later, she clarified that her daughter didn't really "starve" and did have a stash of applesauce and granola bars in her room. Some felt she had done the right thing but many felt she went too far and asked her to reach out to her daughter.

The concerned mom then posted an update saying she had reached out to her daughter. "I told her I shouldn’t have sent her to bed without dinner, and I apologized and asked for her forgiveness. I asked her why she made her comment if she really did taste something bitter in the stew? She started crying and said the stew wasn’t bitter. She said she wasn’t even sure what bitter tasted like (lol). She apologized for making it up. I asked if she wanted me to feel bad, and she said she didn’t know. After a very long and loving, gentle conversation, I think the real root of the problem is that she’s having trouble adjusting to my long hours while I’m working double shifts and finishing up school. I think she was trying to get my attention, one way or another. I told her I’m going to try to give her the positive attention she needs before she feels like she has to resort to getting negative attention," she concluded.