According to NME, sales of the song has also increased —by as much as 184%—within the first three days of the video hitting the platform. 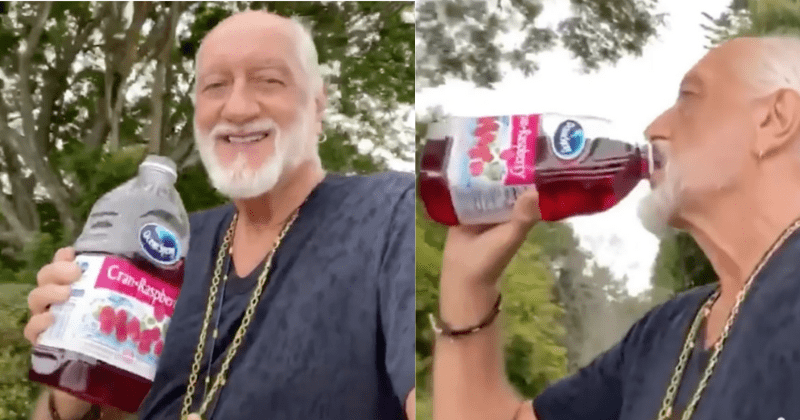 Mick Fleetwood, the co-founder and drummer of popular '60s rock band Fleetwood Mac, has joined TikTok in a bid to recreate a viral video featuring one of the band's most loved songs—"Dreams." The 73-year-old took to the adventure and posted his own version with the title "Dreams and Cranberry just hits different", reports USA Today. The video became a sensation last month when TikTok user Nathan Apodaca posted a clip of him skating around his state of Idaho with a bottle of  Ocean Spray Cran-Raspberry juice in his hand. Posted under the handle @420doggface208, the video was accompanied by a tagline "morning vibes" and was soundtracked by Fleetwood Mac's 1977 song "Dreams" from the superhit album Rumors, which paved the way for the challenge.

Fleetwood decided to pay homage to Apodaca, 37, and his original TikTok "Dreams" rendition by lipsyncing to the song and taking a few swigs of the juice. In his video, the ace drummer put special emphasis on the lyrics which read: "It's only right that you should play the way you feel it," suggesting that Apodaca's version where he's clad in a gray hoodie is the best version online. Fleetwood even suggested that he enjoyed doing the challenge with an Instagram post later the same day where he wrote: "Had way to much fun with this!!" The original version by Apodaca spread fast and wild generating as much as 21 million views and four million likes on the short-video platform while receiving over five million views on Instagram.

The challenge inadvertently boosted Fleetwood Mac's streaming numbers too, as "Dreams" has been played over 105,000 times since, as opposed to 49,000 times prior to the viral challenge. According to NME, sales of the song has also increased —by as much as 184%—within the first three days of the video hitting the platform while streaming number reportedly surged by 242% due to first-time listeners. Among the many commenting on Fleetwood's Instagram video was Ocean Spray, the juice maker, who wrote: "Love this! Hope you enjoyed your juice. We have really enjoyed listening to Fleetwood Mac on repeat lately."

Mick Fleetwood, born Michael John Kells Fleetwood, is a British musician and an actor known for being an iconic figure in the late '60s and the '70s rock music, thanks the success of his band. He spent much of his childhood in Egypt and Norway as his father served in the Royal Air Force and went to London to pursue music at the age of 15. He is a self-taught drummer, a skill he picked up early in life after his family bought him his first drum kit and encouraged him to pursue it. Although the band was relatively popular in the initial stages while still operating in the UK, Fleetwood decided to move to the United States to boost its success and invited Stevie Nicks and Lindsey Buckingham to become regular members of the lineup after previous members Peter Green, Jeremy Spencer, and John McVie left. The new trio worked wonders for the group and contributed to its massive commercial success through the release of the band's greatest album Rumors.

Mick Fleetwood started a TikTok and bought some Ocean Spray so he could recreate the viral Fleetwood Mac "Dreams" video https://t.co/xniPR3tezS

Despite the successes, the band constantly chopped and changed several times with Fleetwood alone being a mainstay as determination to keep the group contributing to its longevity. According to AllMusic, Fleetwood has enjoyed a successful solo career too with his debut album arriving in the form of The Visitor in 1981, which showcased the drummer's interest in worldbeat. Fleetwood then released his second solo record in 1983 called "I'm Not Me," which featured cameos from several Mac members. Apart from his career in music, Fleetwood has also published several written books and even had a brief stint in acting and vinification and has even opened restaurants in Virginia, Hawaii, and Alexandria.

*runs to the town centre, climbs the bell tower, and begins frantically ringing the bell while screaming*

MICK FLEETWOOD HAS MADE A TIKTOK OF HIMSELF LIP SYNCING DREAMS WHILE SKATEBOARDING AND DRINKING CRANBERRY JUICE pic.twitter.com/kbnwNNt9Wu