Michelle Obama Is Launching A Cooking Show For Kids

The former first lady will serve as executive producer on the show. Each episode will be 20 minutes long. 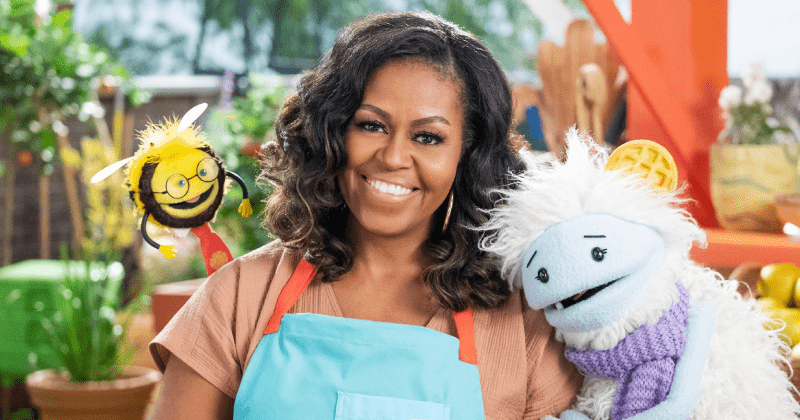 Michelle Obama is launching a children’s food show titled Waffles + Mochi. She will star along with a pair of puppets and it's set to start streaming on Netflix from March 16. The show will be "all about good food: discovering it, cooking it, and of course, eating it," posted Michelle Obama on Instagram, on Tuesday. The former first lady is the mainstay of the show and will be accompanied by puppets "to bring a bit of light and laughter to homes around the world." The episodes will be 20-minutes long and will combine live-action and puppets. Michelle Obama is also an executive producer on the show, reported ABC News.

The show will revolve around two best puppet friends who dream of becoming chefs and travel across the world looking for ingredients and making dishes "alongside renowned chefs, home cooks, kids and celebrities," according to a press release from the streaming service. She will play the role of a supermarket owner who helps the puppets on their journey. "Kids will love it, but I know that adults will also get plenty of laughs — and some tips for the kitchen," wrote Obama. "In many ways, this show is an extension of my work to support children’s health as the first lady — and to be quite honest, I wish a program like this had been around when my girls were young." The former first lady tweeted: I'm also excited to work with @PHAnews to help kids build healthy habits and help families in need cook with fresh ingredients together at home. I hope you'll join us by watching on March 16! #WafflesandMochi.

The show will be produced by Higher Ground Productions, the production company owned by Michelle and Barack Obama, the former president. Erika Thormahlen and Jeremy Konner are the showrunners while the food show will be executive produced by them along with Tonia Davis, Priya Swaminathan, Michelle Obama, and husband Barack Obama. The pair had signed a multi-year agreement with Netflix to produce television shows and films for the streaming service. "I have always believed in the power of storytelling to inspire us, to make us think differently about the world around us, and to help us open our minds and hearts to others," said Michelle Obama at the time, reported NPR. "We created Higher Ground to harness the power of storytelling. That’s why we couldn’t be more excited about these projects. Touching on issues of race and class, democracy and civil rights, and much more, we believe each of these productions won’t just entertain but will educate, connect, and inspire us all," said the former president.

The former first lady had released her Netflix documentary Becoming in May 2020. The documentary was named after the author's memoir and predominantly covered her post-White House life and work. The documentary also featured footage from her 34-city book tour, her travels, and her stint as the first lady. American Factory, a documentary produced by Michelle and Barack Obama won the Academy Award for the best documentary feature last year. The documentary was about a culture clash at a Dayton, Ohio manufacturing plant. The former president and first lady didn't attend the award function in Hollywood. The documentary's directors Steven Bognar and Julia Reichert accepted the awards. "Working people have it harder and harder these days — and we believe that things will get better when workers of the world unite," said Reichert, reported Variety.

"I like this film for its nuanced, honest portrayal of the way a changing global economy plays out in real lives. It offers a window into people as they actually are and it's the kind of story we don't see often enough. This is exactly what Michelle and I hope to achieve through Higher Ground," said Barack Obama after the documentary had secured a nomination.