Michael Douglas Remembers Dad Kirk Douglas On 1st Death Anniversary: 'Love You With All My Heart'

The Oscar-winning actor also shared a montage of images of his father on Kirk Douglas' birthday in December. 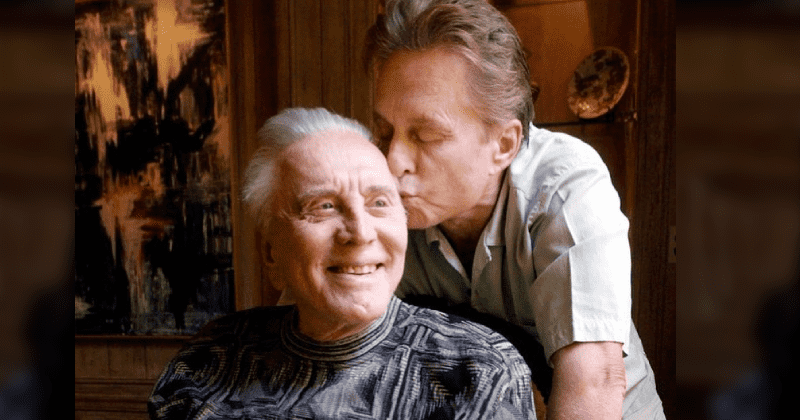 It's been a year since legendary Hollywood actor Kirk Douglas passed away. His son, 76-year-old Michael Douglas, paid tribute to his father on the actor's death anniversary. “Can’t believe it’s been a year since you left us, at 103, you picked a good time to check out. I love you with all my heart!" wrote the Oscar-winning actor. Catherine Zeta-Jones, Michael’s wife, commented on the photo, writing, “Love you Pappy.” The Spartacus actor passed away on 5 February 2020 at the age of 103. "To the world, he was a legend, an actor from the golden age of movies who lived well into his golden years, a humanitarian whose commitment to justice and the causes he believed in setting a standard for all of us to aspire to," wrote Michael Douglas at the time of his father's death. "But to me and my brothers Joel and Peter he was simply Dad, to Catherine, a wonderful father-in-law, to his grandchildren and great-grandchild their loving grandfather, and to his wife Anne, a wonderful husband."

Michael Douglas always looked up to his father. Last year, in May, the star opened up about his father in an interview with Entertainment Tonight. “There wasn’t anyone like him. There’s another generation, that was the great generation, post-World War II…and Dad was one of kind,” Michael said of Kirk. “I think he’s very happy. I know he takes particular pride — not so much in whatever I worked with and I’m doing with the Motion Picture Television Fund — but I know he loves Catherine [and] the work that she’s doing. He always used to tease me. We would call him up and he would be like, ‘Enough with you, let me talk to your wife,' “He was a flirt until the very end," said Michael Douglas. Catherine agreed, “Oh yes, he’s a great flirt."

Last December, on what would have been Kirk Douglas' 104th birthday, Michael Douglas shared a montage of images featuring his Dad and him. The video montage featured a voiceover from Michael Douglas. "The best advice my father gave me was, 'Whatever you do, you do it to the best of your ability. You leave that job knowing that you couldn't have done any more, and then walk away, you've done the best. Don't look back," said the actor. Some of the actor's iconic work includes Paths Of Glory, Lust For Life, and Lonely Are The Brave. Kirk Douglas, a self-made actor, was also known for his charitable work. He left a major chunk of fortune to charity, after passing away. While growing up, he paid for his college by working as a gardener and janitor before winning a scholarship to the Academy of Dramatic Arts in New York that set him on the path of stardom.

Of Kirk Douglas' $61m, $50 million was handed over to various institutions through the Douglas Foundation which was founded by Kirk Douglas and his wife Anne in 1964 to help those who "might not otherwise be able to help themselves." Some of the beneficiaries include St Lawrence University, which funds scholarships for minority and underprivileged students; Westwood's Sinai Temple, which houses the Kirk and Anne Douglas Childhood Center; Culver City's Kirk Douglas Theater, and Children's Hospital in Los Angeles, reported The Mirror. “Its primary focus is improving the education and health, fostering the well-being, and most importantly developing new opportunities for the children who hold our future in their hands,” stated Douglas Foundation. The charity also does work in the healthcare sector to "lend its support to medical research, equipment, and programs within the health system that strive to enhance the quality of care in local communities."