The former first lady posted an image of two black balloons to denote the number 15 but was trolled on Twitter. 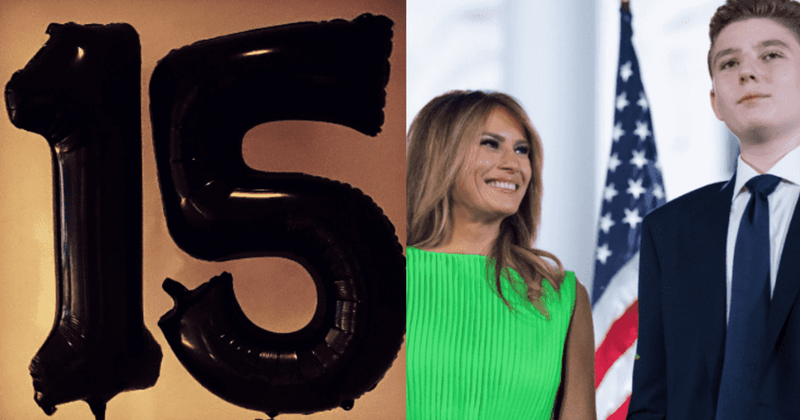 Melania Trump wished her son Barron on his birthday with a rather simple photo to celebrate the occasion but the internet was not having it. The former first lady posted an image of two black balloons to represent the number 15 —  Barron's age. Melania Trump, who has been inactive since leaving the White House, posted the image on Twitter, captioning a message with her son's initials. "Happy birthday BWT," wrote the 50-year-old alongside three heart emojis. Melania Trump was previously active on the platform, often tweeting about her activities as the first lady but has been relatively quiet since her exit from the White House.

It's never easy to live out your teens while growing up at the White House, especially when your father stokes controversy after controversy, but hopefully, Barron Trump has survived these four years unscathed. Barron himself has been the subject of many media stories but Melania Trump has been extremely protective of him, keeping him away from the glare of the media. The Trumps may have left the White House but continue to fascinate Twitterverse. They couldn't help but poke fun at the dark theme for a child's birthday party. "Creepy!! Black balloons for a 15-year-old?? Poor child. That dark world you live in must be so cold but I do wish you a Happy birthday!! Hope it is a great day!!" wrote @KeepingtheFai. Another user Erie Siobhan echoed similar thoughts, writing, "Happy birthday to Barron, but using black numbers for a 15th birthday strikes me as rather odd."

What if black is his favorite color? I know it's mine! Black n pink😏

For all we know, Barron could have picked out the theme or color, but Twitter just wasn't letting it go. User @Penrhos88 wrote, "How festive! Nothing quite says Happy Birthday to a 15-year-old quite like a black balloon that appears to be dripping blood. But then...#BeBest never really made it either." Some crossed a line and took potshots at his parents, "@QuippieChick shared: If only kids could choose their parents... Barron would’ve chosen to have some with better taste, who’d remember his name. And took him to baseball games, instead of treating him like a photo prop."

While there were many toxic tweets, there was also the odd Twitter user showering support on the young lad. User Susan Amundson apologized for the hate on Melania's tweet, "I am so sorry for all the haters. This isn’t about politics this is about a 15-year-old having a birthday. Barron, I hope you have a great day as all teenagers should on their birthdays."

Former President Donald Trump didn't make it any easier on his son, especially when he referred to him as "Melania's son" while addressing the media during his stint as President, reported Yahoo News. Trump was addressing a press conference about the dangers of vaping when he made the gaffe. “We can't allow people to get sick and we can't have our youth be so affected. And that’s how the first lady got involved. She’s got a son," said Trump before hastily adding "together" but by then it had become too obvious that he had referred to Barron Trump as "Melania's son". He then continued to heap praise on Barron Trump as if nothing had happened. "That is a beautiful, young man, and she feels very, very strongly about it." Melania maintained a stony expression as Trump referred to their son as "Melania's son".

The Trump family has moved to their Mar-a-Lago Club in Palm Beach, Florida since Donald Trump lost the election to Joe Biden. Melania was reportedly "checking out a good Florida school for Barron," a source told People. Although Barron was in the White House he was out of the spotlight for the most part. A source told PEOPLE that for Melania her son is the most important thing in her life. "Melania is a great mother and that is her most important role. Barron is the most important thing in Melania's life," they said.