Meet The Nicobar Pigeon, The Closest Living Relative To The Extinct Dodo

The nicobar pigeon species is far more vibrant than the dodo and features a breathtaking plumage encompassing coppers, greens, and iridescent blues. 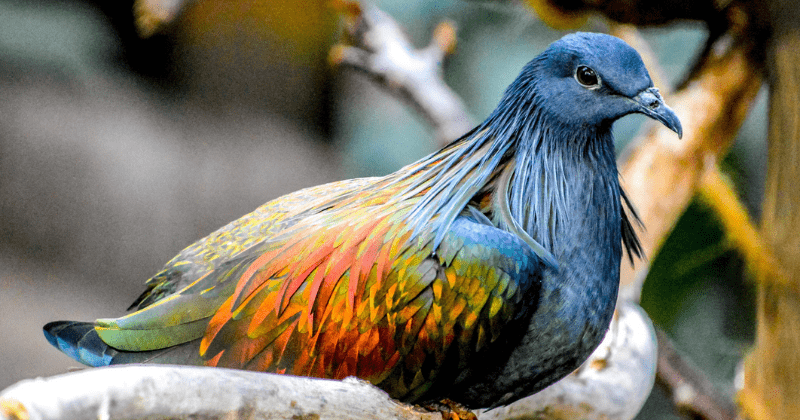 Although the dodo bird has been extinct for quite some time now, it still has several of its kind alive in today's world. One of them is the rare bird called the Nicobar pigeon, which as it turns out is the closest living thing to the flightless bird of the past. There's a distinction, however, when it comes to their appearance. They don't look alike at all as this subcontinental species is far more vibrant compared to the dodo and features a breathtaking plumage encompassing coppers, greens, and iridescent blues. Along with this, its legs are reddish in color and have a tiny white tail, reports The Modern Met. The colorful appearance comes from being spending time in largely isolated areas on small islands where natural predators are scarce. As a result of this, these animals rarely find the need to conceal themselves leading to the pigeons developing feathers with a mishmash of vibrant colors.

According to the Indian edition of the World Wide Fund for Nature, the Nicobar Pigeon is the only surviving member of the genus Caloenus and is found in the Islands of Nicobar (southeast of India), southwest peninsular Thailand, Malaysia, Vietnam, Indonesia, Philippines, Solomans and Palau. Even though the pigeon's flight is known to be powerful with capabilities to sustain long distances, it prefers to eat off the ground in general and tend to survive off of seeds found on forest floors and biting into fleshy fruits. They are known to communicate with their peers with harsh croaks. When the breeding season arrives, between January to March, female Nicobarese pigeons build loose nests high on evergreen trees to lay eggs safely and away from predators.

Years ago the bird was found in abundance in their natural habitat but numbers have since dropped dramatically as they are regularly captured for pet trade and even hunted for consumption. They are also hunted for their gizzard stones, which are basically the muscular, thick walls of their stomach which are extensively used in jewelry. At the moment, the bird is considered "near threatened" and is added to IUCN Red List, with conservation efforts set to be put in place to help its population thrive again.