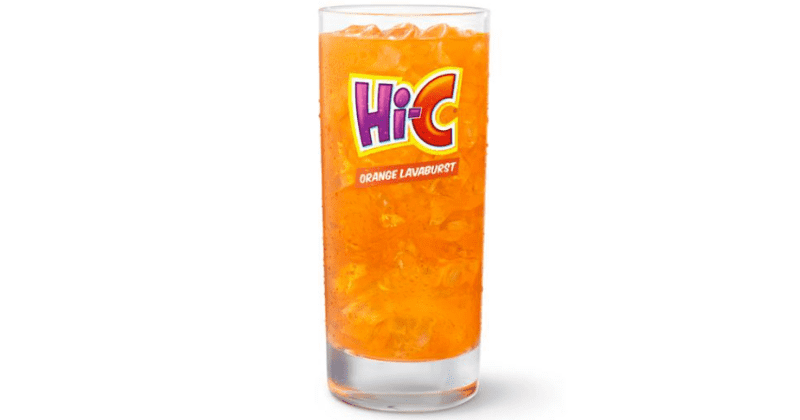 It's official! McDonald's is bringing back the Hi-C Orange Lavaburst, more popularly known as the Hi-C Orange. The drink was one of the popular items in the fast-food giant's menu across the country since it was first rolled out in 1955. But around five years ago the company did the unthinkable - it decided to take off the item for good. And customers were enraged. Even a petition was started by some loyal fans trying to force McD's to bring back their favorite drink. The petition that was signed by over 600 signatures highlighted: "For many people, this is the drink they've been drinking from McDonald's for years. It needs to stay at Mcdonald's for customers to enjoy!" The company also claimed that it received a number of messages and emails for the drink to be brought back.

Well, the pressure seems to have worked because McD's made an announcement on Wednesday on its website and social media about bringing back the Hi-C Orange. "We know fans of Hi-C Orange Lavaburst, AKA Hi-C Orange, have been craving the iconic beverage since it rolled off national menus in 2017. To those who have passionately asked for us to bring it back over the years, we’re excited to say we “C” you. Your tweets, DMs, and petitions asking for its return gave our social media community manager a LOT of content to choose from for an important menu team meeting this morning…and thanks to you, Hi-C Orange Lavaburst will return to McDonald’s menus this year as a regular soft drink option, available nationwide by this summer," said the company.

Y’ALL WE DID IT. Hi-C Orange is coming back 💥 pic.twitter.com/wIaUa6vzPZ

The website further stated that the drink will first be introduced in select locations this month before it is available in "participating" outlets across the country by June. Till then customers were advised to keep track of the availability of the drink through the Hi-C Orange tracker by entering their zip code. The tracker "will be updated on a weekly basis...to find the closest McDonald’s already offering the delicious orange drink," it added. The company thanked all its customers who rooted for the drink to be brought back and stated it "couldn't have done it without u all, the real MVPs! ur fandom over the years, countless tweets, and even IRL petitions are what brought Hi-C back. thx again for the pep talk this am and for making it easy to spread this little bit of joy."

in this presentation i will... pic.twitter.com/NyEHuRPHmA

The drink will be available alongside the other carbonated drink - the Fanta Orange. "Lavaburst lovers – you can get a Hi-C Orange for yourself soon via carry-out, drive thru, the McDonald’s app or McDelivery," the website stated. A tweet on the company's official Twitter handle also posted a message from the VP of marketing where it announced the news while stating, "please stop emailing me about this now." The post became widely popular and was retweeted over 26,000 and liked nearly 150,000 times. Fans left comments expressing their happiness and delight at the news. Others started to ask the company to bring back other items it had discontinued. Laurie Cakes commented on Facebook:
Bring back the Cinnamelts! & ALL day breakfast sammichs (& breakfast until 11am) (sic).

Another McDonald's regular, Tony Schieffer wrote: Bring back the Cheddar Melt!!! Or, better yet, they used to have a steak sandwich (for a very short time)! Kim Bray commented: now can you get them to bring back all day breakfast to go with my Hi-C!