The Mayor, Jaime Torres, spent just 8 days, of the 66-day lockdown, in his hometown during the health crisis. 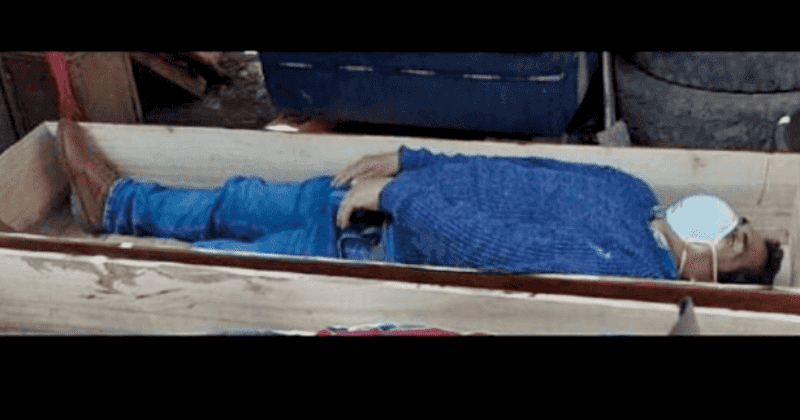 The mayor of a small town in Peru was caught posing as a dead coronavirus victim when the cops came to arrest him for violating lockdown rules as he went out drinking with his buddies. Jaime Rolando Urbina Torres was supposed to be the person in charge of enforcing the shutdown but was caught flouting the rules. Torres was out drinking with his friends in Tantará on Monday night when he heard cops were arriving to round up those breaking the lockdown. Jaime Torres jumped into an open casket and pretended to be a corpse, in order to throw off the cops. The cops found him and duly arrested him on Monday night in Tantara, reported New York Post. He was also found wearing a mask as he lied down in the casket.

The mayor had broken the rules he was supposed to enforce and was arrested for violating curfew and not following social distancing laws. He was out drinking with his friends and was drunk at the time of his arrest. The people and the media have accused the mayor of not taking the pandemic seriously and not taking the measures to implement the lockdown. The Peru central government had announced a 66-day lockdown but according to locals, Torres has spent all of 8 days in town during the health crisis. He hasn't made efforts to implement the lockdown in his absence either. He also failed to secure the town and refused to put any safety checks to stop people from outside of town entering it.

Torres isn't exactly popular in his own town and his arrest in such shameful circumstances should ensure he's never elected again. On May 9, a town meeting was called mandating local officials to show up and Torres was accused of playing down the severity of the virus and causing the virus to spread by failing to implement a lockdown. Instead of acknowledging his mistakes, Torres unleashed a tirade against the locals. According to the local media, one of his own officials lashed back at the mayor for giving excuses for his negligent handling of the Coronavirus pandemic.

Peru has reported more than 100,000 cases and a total of 3,148 deaths because of the Coronavirus. Peru has been struggling to contain the virus despite announcing one of the earliest lockdowns in South America on March 16. Its problems have been further compounded by the country's severely underfunded healthcare system and specifically the lack of oxygen in hospitals. Peru is yet to flatten the curve of the virus. Over the last week, new Coronavirus cases have risen to 3000-4000 each day. It hit a record 4,550 on Tuesday, reported The Guardian. Hospitals in Iquitos, the largest city in Peru, has been overwhelmed with Coronavirus patients and local morgues are struggling to cope with the rising death toll.

Many believe the people have failed to respond to the pleas of the government. “Peru’s response was right on time,” said Elmer Huerta, a Peruvian doctor known for his appearance in the media on public health matters. “It was the first country in Latin America to respond with a lockdown. But the problem was people’s behavior,” said Huerta. “The fact that on the eighth week of confinement you have thousands of people who are positive [for Coronavirus] means that those people got the virus while the country was in lockdown – which means they did not respect the law.”

Peru’s northern coast and Amazon regions have been seriously hit during the pandemic. The central government has announced that it was planning to build a hospital in the Amazon to cater to the Coronavirus outbreak among the indigenous population. The 100-bed hospital in Pucallpa, capital of the remote Ucayali region, bordering Brazil is expected to be functioning in three weeks. "EsSalud will install a fast-build hospital in Ucayali to serve COVID-19 patients," said a government, reported NDTV.