The actor combines eating 7,000 calories a day with chin prosthetics to look set for his role as a boxer-turned-priest. 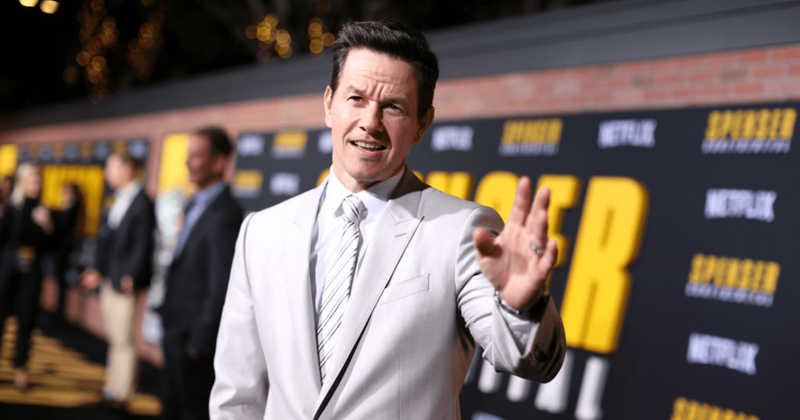 Mark Wahlberg looks unrecognizable as he prepares for a new role in his upcoming film. Combined with natural weight gain, prosthetic chin, and a fat suit, the 49-year-old is doing everything he can as he gets ready to play a boxer-turned-priest in Father Stu. In the photo captured on set, we see Wahlberg wearing a patterned sweater and sporting a buzz cut in what's a complete turnaround from his typically buff physique. According to Today, the actor is playing Reverend Stuart Long, a one-time boxer who went on to become a priest.

The Shooter actor recently shared a side-by-side photo on Instagram in which he flexed his 8-pack abs on one side while appearing to show off a sizeable tummy. "From left photo 3 weeks ago to this, now. Thanks to @chef_lawrence_d cooking," he captioned the post, displaying that he'd gained about 20 pounds in under a month. Wahlberg's personal chef, Lawrence Duran, has been instrumental in the rapid weight gain as Duran is said to be cooking eight meals a day to help the star bulk up for his role. Per reports, Wahlberg is nowhere close to being done as he intends to put on an additional 30 pounds. The 49-year-old is said to be consuming over 7,000 calories a day including protein shakes, big mounds of rice, and at least a dozen eggs on a daily basis.

In an interview on Jimmy Kimmel Live! last month, Wahlberg opened up about his preparation in the run-up to the film's shooting. "After we do the boxing scenes, I get to put on as much weight as possible over the course of the film, so I’m challenging myself to put on 30 pounds in the next six weeks." Though the production house wants Wahlberg to be "as healthy as possible" during the weight gain process, the actor admitted that he is excited about getting to eat a lot of carbs and sweets. "I want to go bakeries. I want to go to Denny’s. I want to get pancakes. I want to get everything I can possibly get my hands on," he said.

According to The Hollywood Reporter, Mel Gibson plays Long's father in the film while his partner Rosalind Ross has taken on the role of scriptwriter and director for the film. The movie depicts the story of Long, an angry young man, who turns to boxing after alienating everyone at the Catholic College he attended. But, when a broken jaw rains on his parade, he decides to move to Los Angeles to start a career in acting. But, a second career also becomes unattainable after he meets with a horrible, near-fatal accident one evening when is hit by a car and run over by another. At the hospital, while receiving treatment, Long has an out-of-body experience which leads him to rediscover his faith in God. That's when he quits everything and enlists as a priest in Mount Angel Seminary in Oregon.

Mark Wahlberg said he plans to put on lots of weight for this role https://t.co/LppGTrLlWI

Walhberg was attempting to bring Long's story onto the big screen for years before finally deciding to team up with Gibson and his long-time partner Ross. Apart from Wahlberg and Gibson, the film also stars Teresa Ruiz, Jacki Weaver, Niko Nicotera, and Chiquita Fuller.