The image shows the infant grabbing a woman's thumb as its nails appear to have been manicured in a dangerous fashion. 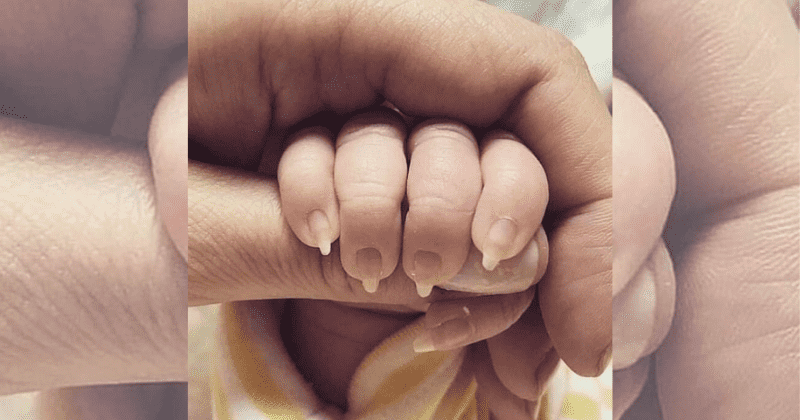 A picture of a newborn born baby with long and pointed nails was posted on Reddit recently and it has since gone viral for all the wrong reasons. The image shows the infant grabbing a woman's thumb as its nails appear to have been manicured by someone. Although Reddit is known for its heated discussions, one can't blame the users to express their outrage at a post like this which seems to be the perfect example of a picture taken moments before a disaster. Without a moment of hesitation, netizens began scrutinising the child's parents and branded the act as "dangerous" and "trashy," and "gross."

One Redditor noted that baby nails are sharp enough to tear through their delicate skin and by giving it a proper pointy head, they were are asking for harm. Baby nails are sharp enough as it is, those things would tear your face right up, wrote Macblack85. Another expressed, "More importantly, THE BABIES face. An itchy eye could result in permanent blindness." A third chimed in: Oh yeah, my daughter gave herself a few scratches with what I thought were well-trimmed nails. She’s more interested in scratching my face to bits now though.

User JBits001 shared their personal experience in the hopes of dissuading parents from trying the same on their kids. Our daughter got my husband in the eye once and it fucked it him up pretty good. Had to wear and eye patch for a week and use drops. We would always be clipping them with the baby clippers but they were still always very thin and sharp, like little razors. After that incident she wore her baby mittens more often (the cloth kind), they wrote. As a parent who cut both children’s nails from birth on mostly because mom was fearful of cutting while trimming them - this has to be some sort of joke a parent did with press on nails. A waste of time in my opinion but no way would anybody smart enough to conjure this up would leave them on - at least I hope, expressed another.

There were some who hoped that the whole thing was made photoshopped and not the real deal. I hope they did this just for the picture but then again they let the baby's nails grow this much. Either way it's not good. I feel for the kid, said renaissance_witch. Definitely photoshopped. If there really were a mother daft and trashy enough to put fake nails on their baby like that, they sure as hell wouldn't have nails this short themselves like the hand holding the baby's, DarthPummeluff gauged. Those are not the baby’s natural nails. Judging by the colour difference in the nail bed and the nail extension, I’d say that they’re most likely SNS, acrylic or plain fake nails. More than likely fake nails pre-shaped before being glued on. What baby is gonna sit still enough for a proper manicure? Still, very gross, shared another.

Before this manicure another debate emerged where a woman could be seen hanging her baby on the back of a bar stool while she sat on it and enjoyed a drink with someone. While some were criticized the mom for hanging the child, who appeared to be around 3-months-old, from a carrier, some thought it was quite an innovate idea. The whole thing just screams 'we don't care about this baby', and being that open about it is pretty trashy, shared one according to Daily Mail. They can't hold the baby in a lap or strap it to one of their bodies or put it in a high chair like parents do? wrote another. Meanwhile, others didn't really see a problem with it. I don't see the issue here as long as the baby is sleeping, said one user. I'm conflicted, I'm angry at her disregard for her own child, yet I find it a little funny. I don't know, I hope the child is ok, another chime in.