The 8-year-old is suffering from a rare terminal condition that limits mobility as he ages. 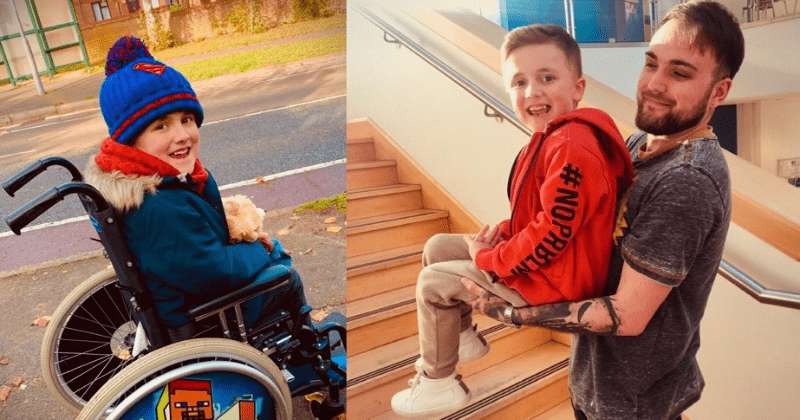 In 2017, Zach Holland, now 8, was diagnosed with Duchenne Muscular Dystrophy - a terminal condition that causes gradual muscular degeneration and shrinkage which severely limits mobility. In spite of the condition, the boy is a happy kid and often roams around in his mechanical wheelchair. However, as his muscles continue to grow weaker he can no longer use his arms to push himself around. And so, his stepfather Josh Collins decided he would buy him an electric wheelchair and nothing would stop him in the process —not even his worst fear, reports InspireMore.

Collins and Dan are two best friends with a lot of things in common: tattoos, beards, gruff exterior, and most importantly a terrifying fear of heights. Saddened by the everyday struggle Holland would go through, the duo decided they had to do something to help out in this situation because the wheelchair they're planning to get the boy costs $12,000. So they resorted to confronting their fears by signing up for a skydive in a bid to raise the funds. Another complication in the boy's situation is that the family has to deal with other treatment costs on a regular basis, limiting the spending threshold. Not wanting his buddy Collins to go through the ordeal himself, Dan too signed up with him for the jump so that he could keep him company.

Soon, the friends started a GoFundMe campaign where they presented the challenge ahead of them and the solution they had to inspire people to donate for the cause. On the page, they wrote: "Our names are Dan and Josh and we’re two big, hairy, tattooed blokes — who are both petrified of heights! Neither of us can imagine anything scarier than jumping out of a plane from a ridiculous height — and neither of us has ever felt inclined to face that fear before in our lives. So... what are we going to be doing on the 22nd September, you ask? Jumping out of a plane from a ridiculous height of course!" Talking about the "best kid in the world" Holland, they said he is "determined despite having to face challenges every day that neither of us could even imagine having to face." They added: "If a kid can be as brave as he is, we reckon we can suck it up and face our fears!!"

The campaign has generated an overwhelming response in less than a month as it reached nearly 90% of the target in less than a month and has surpassed it by some margin since. Both Collins and Dan are aware of how bad the experience could be for them, but they're determined to go through it for the sake of the 8-year-old. "I’m scared of the skydive," Collins told Northampton Chron.

"But at the end of the day, it’s just going to be a bad time for 20 minutes or so, and then we’re going to get Zach the chair he wants." The boy's mother Laura Holland is extremely proud of the work her son's stepfather is doing. “It’s just amazing what Josh is doing," she told Northampton Chron. “He is frightened of heights and he said he wanted to do something out of his comfort zone as he thought he can’t ask someone to donate to something he wants to do."

Laura is extremely proud of her partner. "As a single mum you don’t expect to be able to find anyone who can love your kids as much as you do, but Josh is 100 percent there for Zach. He goes above and beyond," she added.