In a viral video a groom slaps his bride so hard she falls backwards into a chair, all because she playfully moved the wedding cake away from him when he was about to eat it. 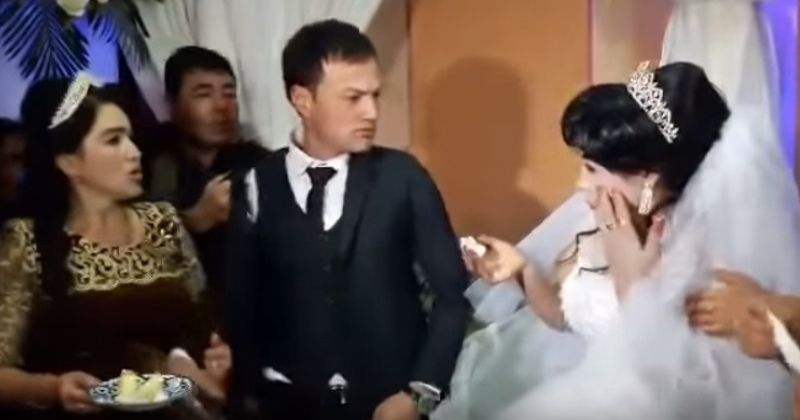 Weddings are known to make at least a few eyes well-up with emotion. There were tears at this wedding believed to have taken place in Central Asia too, but not of the heartwarming variety. During what was meant to be an endearing moment between the newlyweds, the groom violently slapped his new bride with enough force to cause her to topple over into the seat behind her reports the Daily Mail. Horrified guests stood there in shock with their mouths open. No one goes to a wedding expecting to see the groom brazenly assault his new wife. The couple had just been served their wedding cake when the shocking incident took place. The groom had finished feeding his wife a piece of cake and exploded in a fit of rage when she playfully moved the slice of cake she was supposed to feed him. I guess it's safe to say she did not marry him for his sense of humor. It is a wonder that nobody shoved his unsmiling face into the cake. He did not even look sorry as his traumatized wife reeled in the aftershock of his unexpected blow.

After publicly exerting his dominance over his bride, the psycho groom stood there with his chest puffed out and evidently feeling like he had just done all of mankind a huge favor by disciplining his wife. It was the most revolting sight. A man standing behind him held him back as his humiliated bride attempted to get back on her feet again. I hope he's been booked for assault and battery. If he is capable of unleashing such wrath in front of a room full of guests, one can only imagine the horrors that await her in the privacy of their home should she choose to remain with him.

I would have liked to see some instant karma at work right there. How wonderful it would have been if the bride's enraged father and muscular brothers took turns slapping him into the chair. Moving it a little further each time so it's entertaining for the guests, weddings are more fun when there are games. In the end, the groom should be force-fed the entire wedding cake by the bride as a cleansing ritual. I really hope this is what happened after the video ended. It would be maddeningly anti-climatic if the bride was just offered a few comforting hugs and a lecture about men being men.

You would think that there is only room for one angry bride-bashing groom in the world. This is sadly untrue. There are at least two more incidents that we know of, where grooms have resorted to physical violence on their wedding day because their brides decided to prank them while feeding them a piece of the wedding cake. What kind of wedding day voodoo possessed these men to get so worked up over cake is beyond me. This better not be blamed on couples going on crazy carb-free diets for too long before their wedding.

Surprisingly, this is not the first time this has happened. In a video that surfaced three years ago, a demon-possessed groom aggressively slaps at his bride's hand when she teases him by pulling a forkful of wedding cake away from his gaping mouth. He swats at her hand so hard that she's seen clutching at her wrist in pain and shock. The video which was allegedly shot in the Middle East captures the exact moment when the delightful afterglow on the bride's face is unceremoniously knocked right out of her in full view of guests. How do such unfeeling, stone-hearted men manage to woo these women to the altar to begin with? That's some good old-fashioned manipulation right there, friends.

In 2015, there was another clip that made its way onto the internet. Yet again, an innocent bride decided to playfully prank her husband and deny him the pleasure of instantly inhaling a forkful of cake. Right on cue, he erupts in anger, slaps the cake to the floor, kicks the table and inflicts a lifetime of trauma on his new bride who is frozen in shock as the weight of her faulty judgment bears down on her. Of course, there's an audience here, too. Assault is hard enough to recover from without having a room full of people looking at you with pity, as their horrified whispers dance in the air. Talk about red flags in a relationship. I guess the lesson is, never share a cake with a man who is an a$$hole to you and definitely don't marry one.