The woman's husband believes that breast milk is the best and that formula is 'the devil' because it is not natural. 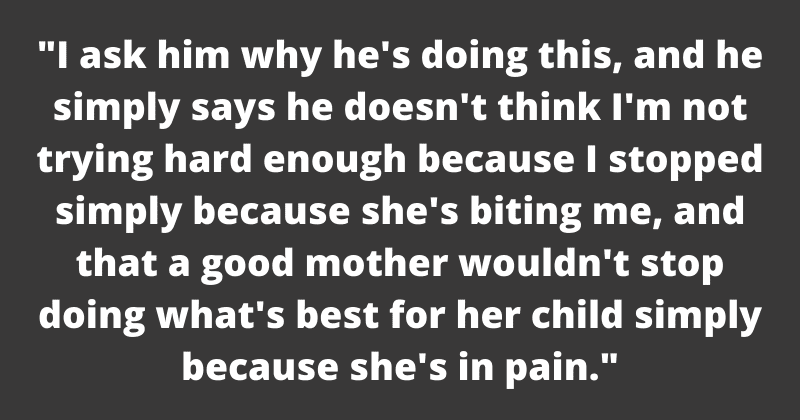 Parenthood is a journey people typically take together as they become mothers and fathers to their children. But the experience is different for different people and each case is handled according to their specific conditions. There is a set of general guidelines for best practices that exist but not everyone can abide by them. For instance, there are a lot of varied opinions about breastfeeding itself, which is just one aspect of motherhood. Some mothers like to exclusively breastfeed their newborns, some prefer formula, while many others like to mix it up according to certain preferences.

But a common problem breastfeeding entails is biting and in most cases, does not persist. The mother can decide the extent of breastfeeding after a discussion with their doctor. But it goes without saying that she can't be forced to breastfeed, especially if causes her physical pain at the whim of the baby's father. This was the query a mother of a newborn took to Reddit to the AITA thread, wondering if she was in the wrong for not breastfeeding her baby who bites. In the post, she explained: My daughter, 10 months old has recently started biting during breastfeeding. When she starts to bite, I simply tell her "no" and put her down immediately. I only started doing this recently because my breasts kind of look like a war zone- I'm bleeding and sore because of the biting and simply cannot take it anymore.

She had instead taken to pumping her breast milk because of the pain it caused her when her daughter suckled: But even that is extremely painful until I let my breasts heal, she explained. Instead, I've been doing a mix of pumping and formula. My husband does not like this. He was okay with me pumping and feeding our daughter until I started supplementing with formula. He believes that breastmilk is best and the formula is the devil because it's not "natural" or something. At this age, I'm giving her milk around 4-5 times a day, and still attempt to breastfeed once or twice a day. This has been a debate for as long as baby formula has existed. No one way has been declared as better than the other, it is usually the personal preference of each parent.

The mother continued: It reached the tipping point yesterday when he hid the formula so I'd have "no choice" but to breastfeed our daughter. I ask him why he's doing this, and he simply says he doesn't think I'm not trying hard enough because I stopped simply because she's biting me, and that a good mother wouldn't stop doing what's best for her child simply because she's in pain. The people of Reddit came to the consensus that the mother is in fact not the a-hole in this situation. Many of the users expressed their anger at the frustrating situation.

User calliatom had a cheeky suggestion, Seriously, let the baby bite his nipples, see how the hell he likes it. Jesus criminey, she's (hopefully) going to be transitioning to solids only soonish, it's not a crime to want to be done with breastfeeding at this point. Your baby isn't going to spontaneously get all the diseases in the world just because you're no longer breastfeeding exclusively. leftyontheleft, a mother with experience wrote, NTA!!! NTA!!! NTA!!! Jesus everloving christ reading that took me back to breastfeeding days. That was one of the hardest things I've ever done. It's a huge effort and accomplishment that you've made it 10 months, OP. This guy needs a serious reality check (and as someone else mentioned, a cheese grater to his nips). What an ass he is.

Another supportive user, cat42000 wrote, Absolutely NTA, and he is gaslighting you. He is not the one having his nipples bitten off daily, he needs to close his mouth on this one and support you. There is nothing wrong with formula, and your baby is almost at the point where they can eat real food anyways. Does your husband have a history of disregarding your feelings and needs for your body? Does he help equally with the baby? The user also assured the mother saying, PS you are not a bad mother for using formula. Smh. He is actively trying to hurt you.