Samir, known as @stacks1400 on TikTok, revealed that his grandfather was sleeping with his girlfriend. 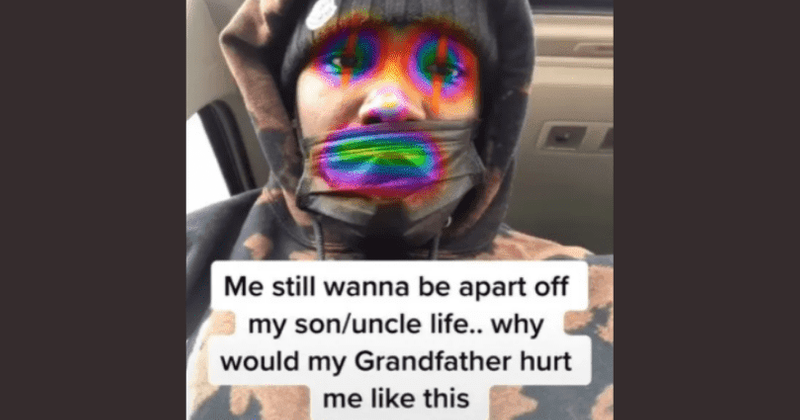 Grandparents are people who you can rely on to be there for you. But to one man, his grandfather betrayed him in possibly in one of the worst ways possible. A dad was left devastated after he found out this own son was actually his uncle! Samir, known as  @stacks1400 on TikTok, recently uploaded a video revealing the shocking family ordeal. The 15-second clip where Samir is crying while recounting the story received over 11.5 million views on TikTok and is filled with comments of support, love, and advice for the heartbroken father. The text over the clip read: Found out my son was really my uncle. My granddad was f'king my girl the whole time we was staying with him. The caption to the post read: Can’t believe I expected more from a man that had a whole other family around the corner from my granny house. #fyp #redpill #ZitHappens

'I found out my son was really my uncle after my grandad had an affair with my girlfriend – but I’m still raising my boy' https://t.co/Jrn0f74Rx1

According to Samir, during some tough times, his grandfather invited him and his girlfriend to stay with him. He didn't charge them to stay with him, but Samir later found out his grandfather had been having sex with his girlfriend while they were staying there. This resulted in the birth of a baby boy that Samir thought was his own son. It turns out his grandfather has done hurtful things like this before because the man captioned his TikTok post, "Can't believe I expected more from a man that had a whole other family around the corner from my granny house."

https://t.co/l2SmqE27rb even family can do you dirty

According to Comic Sands, in a later video, Samir replied to a comment asking how he found out, saying, "She was in the shower, and I had the phone. The baby was on youtube and it kept dinging. And I just went through the messages and it was years worth of messages and pictures and explicit stuff. And people just like 'I would do something to him,' but it's like, what would I do, it's my granddad and it's a girl and it was consensual. It's just messed up they played me like that. He's the one that invited us to live with him. It's f'ked up." Samir shared a second video that showed him looking like a clown, where he was more vulnerable and honest. The text read, "Me still wanting to be apart of my son/uncle's life... Why would my Grandfather hurt me like this?" Samir was once a gang member and went to federal prison for eight years. He turned his life around and is now an advocate for youth and a professional boxer.

While most TikTok users were initially confused by the situation, the dad has received many messages of compassion to help him get through the heartbreaking experience. One person wrote: I'm sorry that happened to you. Another commented: Jesus that's rough. "I'm so sorry for you. I know it seems dark now, get some time away - for yourself. You didn't deserve this, but there is something else for you," a user named Alicia Whilde commented. "don't stop loving that young man. it's your time to stand tall in all this! break the cycle! love that boy. regardless what title he has," another advised Samir. "it's ok the kid didn't have anything to do with it. you should continue being there for him to raise him right!!!!" another added.

In a conversation with Newsweek, Samir confirmed the affair but he decided to keep the identities of his ex, his grandfather, and their child anonymous. He also reiterated that he learned of their affair via messages on his partner's phone. "The baby was watching YouTube on her phone while she was in the shower," he shared. While the child was watching videos, however, the phone kept getting notifications and alerts so he "grabbed the phone and it was texts from my grandfather," he said. "I started reading them and that's how I found out."  Afterward, he "told both of them that [I] was hip to what's been going on" and left. "I have mixed emotions about it now," he added. "Loyalty is rare."

Man learns his son is actually his uncle due to grandfather's affair https://t.co/2TGaWTYHFE