The video shared on Twitter was viewed thousands of times. 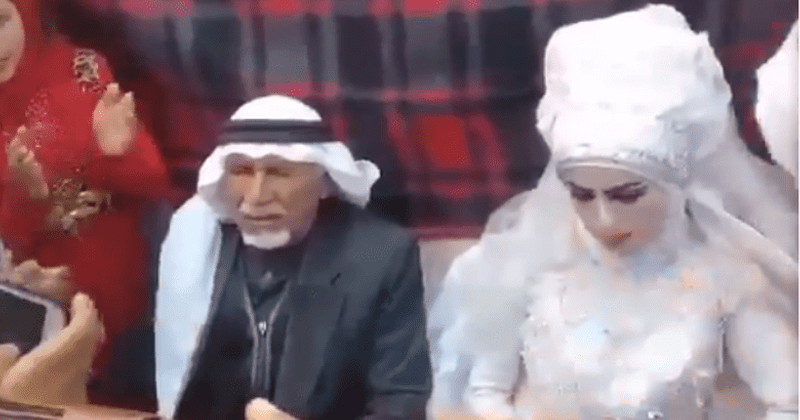 We've heard of people marrying once, twice, and probably a few times more than that. But a viral video that is doing the rounds apparently shows a man marrying his 37th wife! The video was shared on Twitter by a senior police official in India named Rupin Sharma. He captioned the video: BRAVEST MAN..... LIVING 37th marriage in front of 28 wives, 135 children and 126 grandchildren. The video shows an elderly man in a keffiyeh and a younger woman beside him, both surrounded by many people who are clapping, shouting, and hollering for the couple and were celebrating. The person who tweeted the video does not provide any proof or further details about the veracity of the story, but it was enough for his followers to comment,  like, and share it numerous times after being originally shared on June 6.

37th marriage in front of 28 wives, 135 children and 126 grandchildren.👇👇 pic.twitter.com/DGyx4wBkHY

Many of Sharma's followers expressed their support for the man's marriage. One person wrote: Very great job ALLAH Protect his life from all bad thinkers. Another added: Atleast he is marrying them and taking responsibility of 37 women (sic). Some were surprised why the other wives and relatives were so happy, like this person who wrote: What gives so much happiness to the 28 wives and their children. Many people were angered that the top cop called the act of marrying 37 times an act of bravery. Another person commented: I do not know how marrying someone is bravery and that too an IPS (Indian Police Service) thinks its bravery.....it could be termed perversion but bravery how?

I don't find any barvery here, it's height of the shamelessness. I feel pitty for the young lady.

Yet another wrote: Bravest or lewdest man! Shameless perverted man... can't think of anything other sex... Small man with big libido...Curse on earth. It is not known who the person is or where the video was shot. If the story is true, then the man would unseat Ziona Chana, a resident of Mizoram, India, who has been recorded to have the largest family in the world. Daily Mail reported that Chana has been married to 39 women and has 94 children, 14-daughters-in-law, and 33 grandchildren. The family lives in a 100-room inside a four-story building. "Today I feel like God's special child. He's given me so many people to look after. I consider myself a lucky man to be the husband of 39 women and head of the world's largest family," Ziona said during an interview.

In Mizoram, there exists a building with 100 rooms! No, it’s not a hotel and is an actual house of Ziona Chana, the man who has India’s largest family – 181 members and counting! Meet the family who believes in more the merrier now! #OMGIndia pic.twitter.com/Qe9NzEhynm

The wives live in dormitories. One of his wives, named Rinkmini, said, "We stay around him as he is the most important person in the house. He is the most handsome person in the village." Another wife of Chana's, named Huntharnghanki, said, "The family system is reportedly based on 'mutual love and respect. To expand my sect, I am willing to go even to the U.S. to marry." Chana said during elections, local politicians always court him since they know he and his family can considerably sway the votes. “During every election we are much in demand as the winning margins of politicians in this state are slim, so even 100-odd votes matter to them,” he told AFP. "When we go to vote, we always cast our ballots for the same candidate or party. That means more than 160-odd votes are assured from one family,” Rinkmini added.