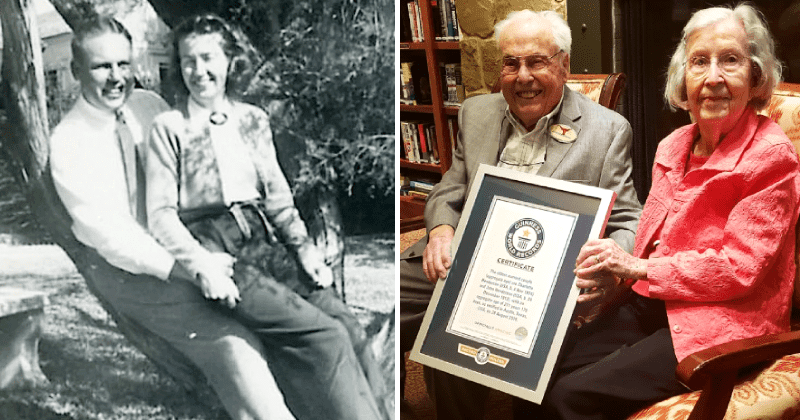 Charlotte, 105, and John Henderson, 106, from Texas have been officially named the oldest living couple by Guinness World Records. The couple, with a combined age of 211, celebrated 80 years of marriage on December 15 this year. The pair met as students at the University of Texas in 1934. They both were in zoology class where he sat right behind Charlotte Curtis, after being seated alphabetically, according to a report by TODAY. John Henderson remembers the first time she turned and smiled at him and he knew right away that he wanted to ask her out. "Charlotte looked over her shoulder and smiled, and I knew I wanted to take her on a date," said John Henderson before adding, "She was anxious for me to ask her!”

“I thought he was just a fine fella, and I didn’t mind his looking over my shoulder,” Charlotte told The Washington Post. John Henderson played football while Charlotte was studying to be a teacher. John also holds the record of being the oldest living former University of Texas football player. The couple has forgotten how many years they've been together but vivid images from their wedding day remain clearly etched in their memory. “I remember the wedding day, the day we got married, as though it were yesterday because it's so vivid in my mind,” said John Henderson. “I have to ask him how long we've been married because, from year to year, I just forget," said Charlotte Henderson, according to KVUE.

The couple that wed during the great depression in 1939 has seen a lot in their time but they never look back. The couple married after 5 years after meeting each other. “It took her five years to make up her mind that she wanted to get married,” joked John. Having witnessed the financial crunch firsthand the couple were keen to save enough before living together in a new home. Charlotte became a teacher in Houston while John coached football and basketball in Texas. The pair got married in a small ceremony with just two guests present, on December 22, 1939. They reportedly spent only $7 on a hotel for their honeymoon in San Antonio.

Their nephew Jason Free said the couple is still planning for the future, "They don’t dwell on the past. You won’t hear them say, ‘Oh, if only it were 1952 again, everything would be great.’ They are still making plans for their future together.” The couple is currently living in Longhorn Village, a retirement community in Austin. Charlotte continued as a teacher while John had a long career at Humble Oil and Refining Co before retiring in 1972.

The couple has no children, with some speculating that to be secret of their longevity. "Some people think it’s because we never had kids!” jokes John Henderson but on a serious note, he adds that exercise has been a key factor contributing to their health. He adds that it's important to "live life in moderation and being cordial to your spouse." They enjoy watching sports and John Henderson still makes it a point to go watch matches. “In our ages, we’ve slowed down somewhat. We used to go on cruises, but now we have to take it easy. We like watching sports and talking about what we’re going to do tomorrow.”

While they hold the record for the oldest living couple, they still have a good six years to surpass the record for the longest marriage. Zelmyra and Herbert Fisher who got married at the age of 17 and 19, respectively, were married for 86 years and 290 days until Herbert died in 2011.