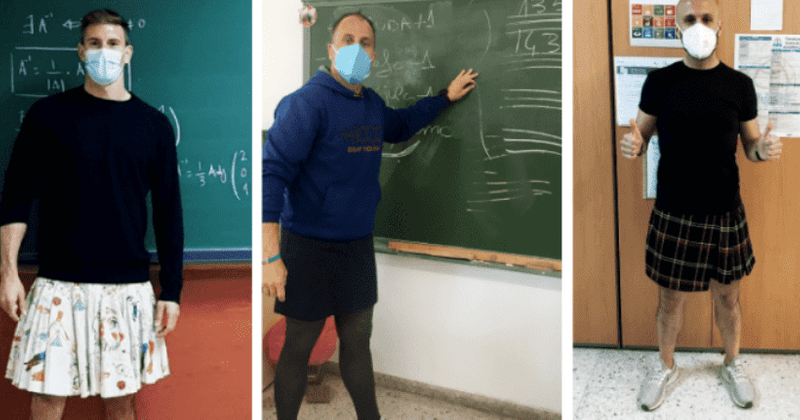 Two male teachers in Spain decided to wear skirts for a whole month to support one of their students who was bullied for his choice of clothing. Manuel Ortega and Borja Velázquez, teachers at the Primary Virgen de Sacedón wanted to teach the bullies a lesson. And that it's alright for people to express themselves the way they wanted and without the consequence of being treated badly. And the message echoed not just in the school but around the world. According to Newsweek, Ortega told a local media outlet the bullied student had worn an anime sweatshirt to school. His peers teased him with "racist and homophobic" slurs as a result. The victim ultimately changed his clothing unable to bear the insults. While Velázquez, attempted to discipline the bullies by scolding them, he realized it wasn't really working.

That's when he and his colleague decided to take a different route in getting the point across. Speaking with another local outlet, Velázquez said the goal was "to teach that you have to change and that words hurt." The two compassionate teachers spent the whole month of May donning the skirts that sparked a conversation on bullying and respect for other people's choices that transcended the school and joined a nationwide movement. The two teachers became part of the #ClothesHaveNoGender, or #LaRopaNoTieneGenero, that began in the country after a similar incident in another school where a male student was expelled for wearing a skirt to class. Even in this case, a teacher, although of another school, stood in solidarity with the student by earning a skirt to school.

Velázquez shared a picture of himself and Ortega wearing skirts while in their respective classroom. He put a caption with this picture which read: "A school that educates in respect, diversity, co-education, and tolerance. Dress as you want!" And what's even better is that Ortega and Velázquez's school also had their back and put out their own tweet supporting the teachers. "Because educating is not only transmitting knowledge but instilling values of respect, tolerance, and acceptance of diversity," the school said in a tweet. The institution has also organized various campaigns against bullying and toxic behaviors by students. The teachers said in their interview their students have now got the confidence to challenge "outdated" clothing ideals and beliefs after their actions. And add to this many former bullies have also issued apologies for their previous actions.

Teachers are the best role models. Click the link for the full story. https://t.co/ePLUZBvqrU

Back in 2020 a student named Mikel Gómez, was expelled by his school when he went to school wearing a skirt. In a now-viral TikTok video, he recounted the incident that sparked outrage. Not just thrown out by his school, he was also forced to see a mental health professional. Gómez said he had chosen the clothing in support of transgender individuals. In solidarity with Gomez, a teacher named Jose Piñas sported a skirt while attending his class and even tweeted about the same. He said he was bullied for being gay when he was a student at the same school he worked. "Twenty years ago I suffered persecution and insults for my sexual orientation in the institute where I am now a teacher," Piñas wrote. "I want to join the cause of the student, Mikel, who has been expelled and sent to the psychologist for going to class with a skirt," he added.