trending celebrity people lifestyle news animals
Madonna Was Told She Was Unfit To Adopt A Child As A Divorced Woman, Now She's A Mom Of 6

Madonna Was Told She Was Unfit To Adopt A Child As A Divorced Woman, Now She's A Mom Of 6

62-year-old Madonna is the mother of six beautiful children, out of which four were adopted. 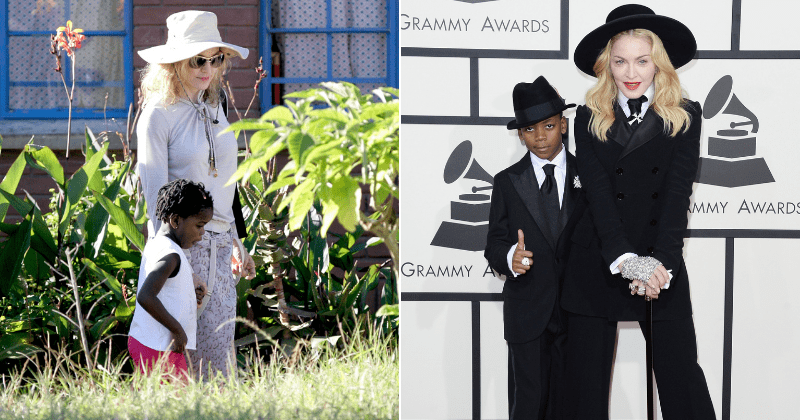 There's no doubt that Madonna is an icon in the world of music and pop culture. The entertainer is also the mother of six beautiful children, four of whom were adopted. The 62-year-old diva is mom to daughter Lourdes who she shares with former flame actor and personal trainer Carlos Leon, son Rocco, 20, with her ex-husband Guy Ritchie, and adopted children David Banda, 15, Mercy James, 15, and twins Stella and Esther, 8. But the road to motherhood hasn't been an easy one for the star.

.@Madonna Opens Up About Life with 6 Kids and Her Emotional Adoption Journey: 'It's Complicated — But So Worth It' https://t.co/y2iuPBuusY pic.twitter.com/qrTYduM2ET

While she was able to successfully adopt her first son, David Banda in 2006, it wasn't smooth sailing when the singer was keen on adopting Mercy James from Malawi the following year. The courts in the country did not favor the adoption due to Madonna's marital status.... A divorced woman. But the singer was determined. “I was granted permission to adopt David first. And some time later, I filed a petition to adopt Mercy. But this time, the judge who was presiding said no. I was recently divorced, and she informed me, as a divorced woman, I was not fit to raise children and that Mercy James was better off growing up in an orphanage,” the seven-time Grammy winner shared, according to PEOPLE.

“I met Mercy soon after I met my son David, but they were living in different orphanages. David was in Mchinji in Home of Hope, and Mercy was here in Blantyre at Kondanani. Mercy was suffering from malaria, and David from pneumonia. And when I held each of them in my arms, I whispered in their ears, that I would look after them. And I promised them that they would grow up into strong and healthy adults,” Madonna recalled.

Here’s to strong women and girls ❤️ like our founder @Madonna 👑, Mercy James 👩🏾, Esther 👧🏾 and Stella 👧🏾 May we know them, be them and raise them! Tag a strong woman in your life 🙏🏾✨ #thefutureisfemale #MondayMotivation pic.twitter.com/lev2KfeZj3

Madonna was in the midst of separating from her second husband Guy Ritchie and Mercy was placed at Children’s Village following the death of her teenage mother. “If you know me, you can imagine how I received this information. It’s true, I am a freedom fighter. I am a feminist. I am a rebel heart. But I am also a compassionate and intelligent human being. And if you cannot give me a logical reason for the word ‘no,’ then I will not accept the word ‘no.’ I hired a team of lawyers, and I took my case to the supreme court, and it was not an easy battle,” Madonna shared. “The adoption laws in Malawi had not been reformed since the early ’40s, and it had not occurred to anyone to change them yet. So my argument was that women have been raising children for centuries, on their own … not to mention the fact that I was doing just fine raising my own three children,” she said.

Happy Mother’s Day Mama! There is no me without you! Losing you was the catalyst for everything. Thank you! ♥️ Hope I have made you Proud! #lola #rocco #david #mercy #stella #estere pic.twitter.com/ESO2Oa2qbg

The determined mother was not going to give up the fight. “I never gave up. And I never backed down. And I believe that if you want something badly enough in life, the universe will conspire to help you get it. It may not be exactly when you want it, it may not come exactly when you think it’s gonna come. It may not come in the package that you want it. But if you persevere, you will win,” said the worldwide superstar.

Madonna takes her 6 kids to dad Silvio's vineyard to celebrate his 90th birthday: 'It was so special' https://t.co/wXg5INFANb pic.twitter.com/oI0PUYMYUX

It took three and a half years, but Madonna was finally able to call Mercy her daughter. “I fought for Mercy, and I won. It wasn’t easy... So I’m here to say: never, ever give up on your dreams. Never stop fighting for what you believe in. And finally: Love conquers all," said the singer. In the years that followed, Madonna went on to adopt two more children.  In 2017 the diva opened the Malawi's first-ever pediatric surgery and intensive care center in honor of her daughter's story. She named it The Mercy James Institute for Pediatric Surgery and Intensive Care. The center at the Queen Central Hospital was funded by Madonna’s charity, Raising Malawi, which she founded in 2006.