trending celebrity people lifestyle news animals
Louisiana Police Shoot And Kill Black Man As He Walks Away From Them. He Was Shot 11 Times

Louisiana Police Shoot And Kill Black Man As He Walks Away From Them. He Was Shot 11 Times 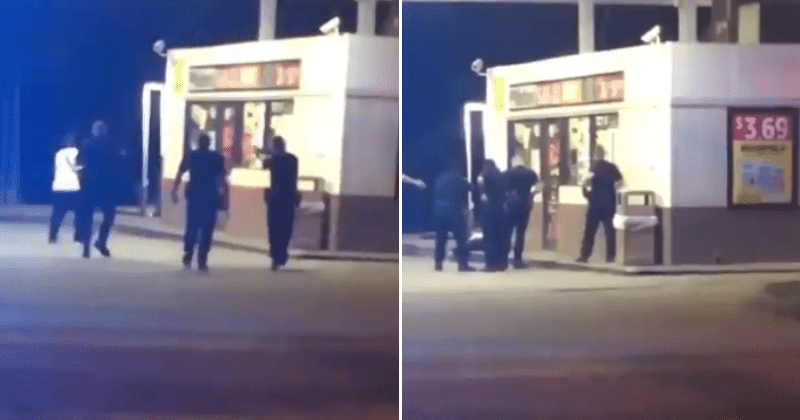 A Black man was fatally shot by Louisiana police​ outside a Lafayette​ convenience store​ on Friday. A disturbing video of the incident has been circulating on social media that shows about half a dozen policemen surrounding the man who was then shot 11 times. The victim was identified as 31-year-old Trayford Pellerin. The state police said that the man was carrying a knife so they first tasered him and then shot him dead. Community leaders argue that the incident did not have to escalate as it did and end in the killing of a man, according to the Daily Advertiser.

HAPPENING NOW: A huge crowd is being formed outside of the Circle K Shell station where 31-year-old Trayford Pellerin was shot by Lafayette police last night. The NAACP and other community leaders are holding a rally in his honor. #trayfordpellerin pic.twitter.com/mapMUDGRWJ

Police responded to a report of a disturbance "involving a person armed with a knife at a convenience store" at about 8 p.m. on Friday. In a press release that was released by Mayor-President Josh Guillory's office, the police had tried to de-escalate the situation through "numerous efforts" and subdue the "knife-wielding suspect through the use of tasers." It continued, "The officers opened fire when it became apparent the armed individual was attempting to enter a convenience store, threatening the lives of the customers and workers inside."

This is Trayford Pellerin, shot several times in the back at close range by Lafayette, LA police as he was walking away from them. He was 31. At a time when communities are peacefully marching for an end to police violence against Black people, this fatal shooting is outrageous. pic.twitter.com/euHOp6tzDP

The moments leading up to the incident was filmed by Rickasha Montgomery. In the video, she can be heard saying that the man had a knife and hoped he he would get down on the ground or the police would shoot. "When I heard the gunshots, I couldn't hold my phone like I was first filming," Montgomery said. "I feel kind of scared about it. I'm traumatized. You're so used to hearing about this, but I never thought I would experience it." She also mentioned in the video stating, "He's not even doing nothing." After he was shot she exclaimed, "Oh my God, they just shot this man. They literally just killed this man in front of me."

Trayford Pellerin was 31. He loved to cook. He was smart. Quiet. Kind. He had just seen his grandmama’s new home for the first time yesterday. He was Black.

He was shot and killed by police in Lafayette, Louisiana last night. https://t.co/yLCoyvj034

Pellerin's mother told ABC News, that her son was intelligent, shy, and had sought therapy for social anxiety. "Instead of giving him a helping hand they gave him bullets," national civil rights attorney Ben Crump stated. Lawyers will be suing over the death of Pellerin and Baton Rouge attorney Ronald Haley along with Crump have started an investigation. State ACLU executive director Alanah Odoms Hebert said in a statement, "Trayford Pellerin should be alive today. Instead, a family is mourning and a community is grieving. None of our communities are safe when the police can murder people with impunity or when routine encounters escalate into deadly shooting sprees."

Tear gas has been deployed against citizens protesting a police shooting in Lafayette. @theadvocateaca pic.twitter.com/fJCKNXKfgs

The shooting prompted a protest in the area. Police in riot gear fired smoke canisters at the gathering to disperse them. As the Black Lives Matter protests continue, this is yet another brutal murder that was captured on camera. In May, George Floyd was choked to death by a White Minneapolis police officer and it was caught on camera. "Once again, video footage has captured a horrific and deadly incident of police violence against a Black person who was brutally killed in front of our eyes," Hebert said. While we need to know much more about what occurred last night, we know that it began with a routine 'disturbance' call and cell phone video from the scene clearly shows Mr. Pellerin moving away - not towards - police officers, only to be tased and then brutally shot dead."

Louisiana State Police are investigating the death of Trayford Pellerin, a 31-year-old Black man who was fatally shot Friday night during an encounter with officers from the Lafayette Police Department. https://t.co/uhZ42pV2R4

The Louisiana State Police also stated that an independent investigation about the incident would be conducted. "Investigators will receive the full cooperation of the Lafayette Police Department and Lafayette Consolidated Government," they said in a statement. "We stand with Trayford's family in demanding justice and transparency into the reckless shooting and tragic killing of this man," Crump said. "We refuse to let this case resolve like so many others: quietly and without answers and justice." The video captured by Montgomery is graphic, viewer discretion is advised.