Lawrence Brooks, Oldest US World War II Veteran Turns 111 Next Week, & You Can Send Him A Card 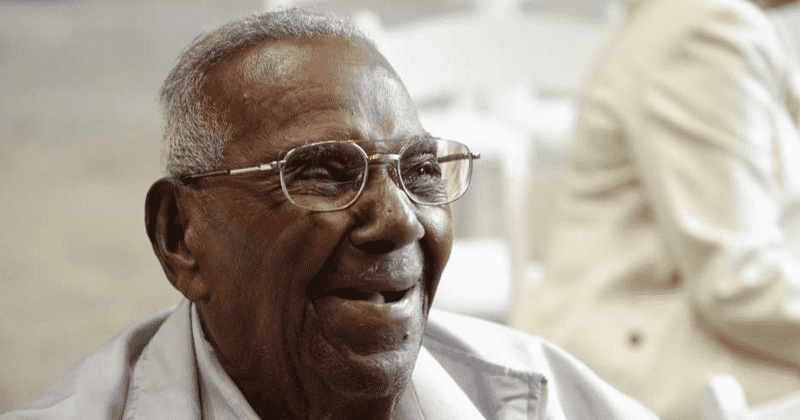 Lawrence Brooks once stood on the battlegrounds of World War II, fighting for the allied forces to defeat the Nazis. His life now involves showering love on his five children and five stepchildren, 12 grandchildren, and 23 great-grandchildren. As one of the oldest remnants of a bygone era his experiences are but a treasure trove of memories he can recall, some with ease, other with considerable effort. One of his important stories involves him being a young soldier for the 91st Engineer's Battalion in WW II's Pacific Theater, where he was assigned to a C-47 plane carrying a shipment of barbed wire from Australia to New Guinea. But, disaster struck as one of the engines gave out, reports Smithsonian Magazine. In a state of utter panic—as every action or the lack of it hinging on their survival—Brooks, the pilot, and co-pilot were forced to think on their feet. And they did, by throwing out much of the wire into the ocean to stabilize the aircraft. It may have been nervewracking then, but Brooks remembers to laugh it off now. In a 2015 interview with World War II Museum, "It was a scary moment," he said. "But we made it."

Lawrence Brooks was born on Sept. 12, 1909. During World War II, he served in the predominantly African American 91st Engineer Battalion, which was stationed in New Guinea and then the Philippines. https://t.co/QJu4GFmKnL

Brooks is all set to turn 111 in just over a week, on September 12, and in doing so, he will hold the crown as the oldest United States army veteran to have served in the US army. Currently, the centenarian is one of only 300,000 veterans alive of the 16 million soldiers who served in World War II, as per data provided by the Department of Veterans Affairs. However, not many will have experienced the war as Brooks did —as a Black 30-something soldier—when it wasn't exactly a very common sight. That didn't earn him much respect back home; he still had to endure racism and discrimination for his skin color as it was during a time before the civil rights movement. He was treated with way more respect elsewhere, however. "I was treated so much better in Australia than I was by my own white people,” he said. “I wondered about that. That’s what worried me so much. Why?”

Speaking of the racist characterizations of African American soldiers during the war, Rob Citino, a Senior Historian at the National World War II Museum in New Orleans, spoke to National Geographic and said: "You couldn’t put a gun in their hands. They could do simple menial tasks. That was the lot of the African-American soldier, sailor, airman, you name it. We went to war with Hitler, the world’s most horrible racist, and we did so with a segregated army because, despite guarantees of equal treatment, this was still Jim Crow America. African Americans were still subject to all kinds of limitations and discrimination based on the color of their skin."

Brooks, however, has lived through the worst and looks forward to spending a relaxed birthday later this month. "I had some good times and I had some bad times," Brooks said. "I just tried to put all the good ones and the bad ones together and tried to forget about all of them." At present, he loves celebrating his big day with others at the National World War II Museum in New Orleans like he's done for the last five years. What kept him buzzing was the live music, lots of people... and cupcakes. Due to the pandemic and the inability to gather as they typically would, the history museum is encouraging people to mail Brooks cards for his birthday.

The National World War II Museum is asking well-wishers to send cards to Lawrence Brooks, who turns 111 this September https://t.co/BnHwM4QTF8 via @SmithsonianMag

If you want to be one of those to send Brooks a personal card, you can send them here:
The National WWII Museum
c/o Happy 111th Mr. Brooks!
945 Magazine St.
​New Orleans, LA 70130

Due to the coronavirus pandemic, a traditional gathering can't take place this year. Instead, WWII Museum officials are hoping that New Orleanians will send Brooks a birthday card to commemorate his special day. Here's how: https://t.co/uTaQe4dcLg