The Largest Known Human Poop Belongs To A 9th Century Viking, And It Is 8-Inches Long 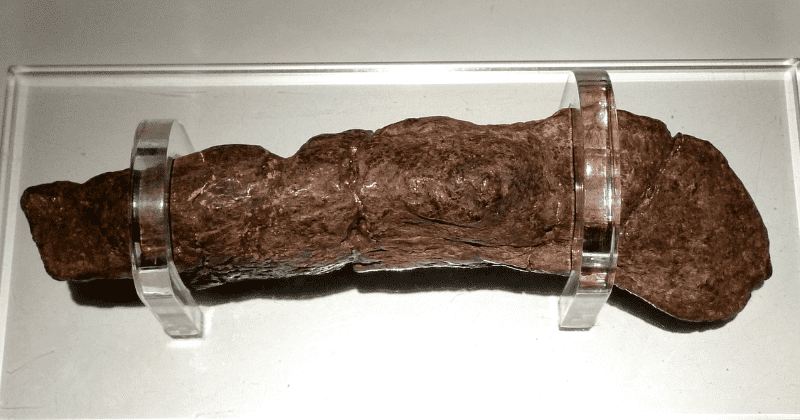 As humans, we have always been fascinated with the idea of preserving and showcasing things of the past. But a recent object that has caught people's attention is something that will surprise and repulse you at the same time is a big-sized poop. The "long"-lost turd measures a whopping 20 cm or 8 inches in length, and its girth is 5 cm or 2 inches wide. This discovery was excavated from a now-abandoned Viking settlement.

The historical poo, which is known as a coprolite by the scientific community, was first discovered back in 1972 in the U.K., according to The Sun. At the time, archaeologists from the York Archaeological Trust were conducting an excavation in an area, which is now known as the York branch of a Lloyds Bank, when they came across the enormous find. It's curious to know how they managed to distinguish the turd between rocks and other items that were being uncovered from the earth. Nonetheless, they did and the feces specimen was handed over to officials who uncovered some interesting facts about its owner following some tests.

The length and width of the Llyods Bank Coprolite were undoubtedly shocked but it left many wondering how it remained intact all these years. To explain this, you first need to know that coprolite is actually a term used for fossilized feces. Per the excavating research, the coprolite was covered with layers of earth that were peaty and moist -  the perfect combination for the preservation of organic matter. Thus, over time the excrement had turned into a fossil and remained relatively intact.

The dump is now on display at the Jorvik Viking Centre as it is believed to be the largest fossilized human excrement ever found. The mammoth dump is believed to have been laid by a Viking who lived around the 9th century AD. Following a range of tests, researchers were able to discover that their diet mainly consisted of meat and bread. Their meat-heavy diet could have been the reason why experts found hundreds of parasitic eggs in it and it did leave them worried for the health of ancient pooper. Researchers suggest that the Viking who dumped that poop years ago was riddled with intestinal worms.

I bet that viking had a spring in his step for weeks after that.

This finding meant a lot for them as YAT paleontologist Dr. Andrew Jones said in 1991, "This is the most exciting piece of excrement I’ve ever seen. In its own way, it’s as irreplaceable as the Crown Jewels." But the giant poo's journey did not just end there. Back in 2003, the excrement was accidentally dropping during an exhibition and it ended up breaking into three pieces. That being said, it was reconstructed for visitors of the Jorvik Viking Centre to see just how huge the turd really is.

Some may claim that they have laid a bigger poo and while it seems like an achievement of some sort, it could often result in embarrassing situations. Things can get awfully uncomfortable if you lay a big one in some else's bathroom and then cannot flush it down the toilet. Now, let me introduce you to the solution, which is called a poop knife. As bizarre as it may sound, the product is actually used to cut your poop into manageable pieces so it can go down the drain without any trouble. Never to be mistaken for a box opener again 📦, this poop knife is one of a kind - made from metal-reinforced silicone it is strong, hygienic, and easy to clean. 💦* Guaranteed not to turn into a rusty punji stick. Be a samurai of the porcelain poo poo platter, claims the website of the product.

The POOP KNIFE is real! I know what @kimfaul and @shyvioletisme are getting for CHRISTMAS. 🎅🏻💩🔪 pic.twitter.com/iPSSqBUpB2