A 30-second video shows a 44-year-old orca ferociously ramming her head and body against the side of her tank. 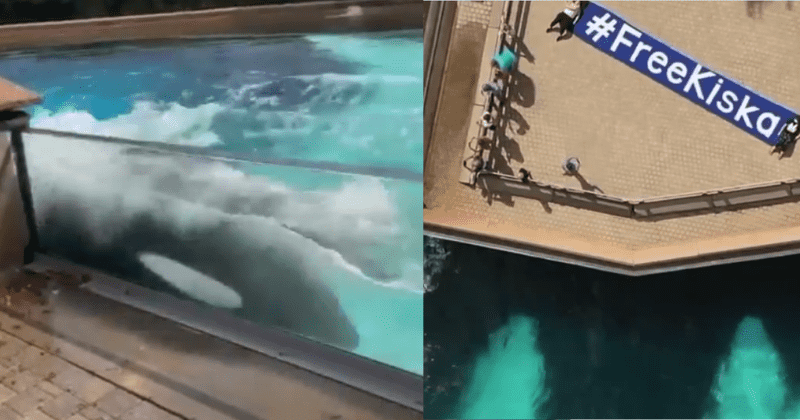 A heartbreaking sight was captured on camera where a "distressed" killer whale was seen repeatedly banging her head against the side of her tank. Dubbed as "the loneliest whale in the world" by the Whale Sanctuary Project, Kiska has been in captivity since 1979. There was a time when she lived happily with her family in the Icelandic Ocean but at the age of three, she was caught and sold to MarineLand in Niagara Falls, Canada, which left her caged. Whistleblower Phil Demers, who is a former professional marine mammal trainer at the park, was the one who filmed and uploaded the disturbing clip online, reports New 18.

This video was taken on Sept 4th, 2021. Anti-captivity activists entered MarineLand and observed Kiska, their last surviving orca bashing her head against the wall. Please watch and share. This cruelty must end. #FreeKiska pic.twitter.com/sBCaKleH19

"This video was taken on Sept 4, 2021. Anti-captivity activists entered MarineLand and observed Kiska, their last surviving orca, bashing her head against the wall. Please watch and share. This cruelty must end. #FreeKiska," read the caption of the 30-second video where the 44-year-old orca can be seen ferociously ramming her head and body against a wall. Demers uploaded a second video on Twitter, which showed a closer side view of the whale's distressing behavior. "Another angle. This is dangerous and self-harming behavior. Kiska is in distress," he noted. "I want to see Kiska taken to an interim facility with other orcas until the Whale Sanctuary Project (in Nova Scotia) is built. Visitors can support find the Whale Sanctuary as well as support animal abuse whistleblowers at The Whale Sanctuary Project."

UPDATE: We have more heartbreaking video of Kiska, MarineLand’s last surviving orca floating listlessly at the surface of her concrete pool. She has lived in complete isolation since 2011. Witnesses say she often calls out for other orcas. #FreeKiska pic.twitter.com/TWyw9x781B

While being caged at the water park, Kiska gave birth to five calves but all of them died young. Having outlived her mate and children, the orca was forced to live in isolation since 2011. Killer whales are known to be social animals, who live in groups comprising many multi-generational families. There was a time when Kiska was "docile" but after years of not receiving any response from other whales due to her isolated living condition, she was pushed to the breaking point. "For over 40 years, she has suffered the loss of her freedom, her babies, and all of her tank mates. For the past 10, she has been in social isolation from others of her kind. This is what her loneliness, and her captivity, has done to her," explained the Orca Rescues Foundation.

A disturbing video of orca Kiska has emerged. Posted by IG: breakingmarineland, it shows her repeatedly bashing her head against her MarineLand tank- a type of self-harm that has killed captive cetaceans in the past.
Learn more about MarineLand: https://t.co/bBMMazHBzO#FreeKiska pic.twitter.com/zNhn56VdN2

After the video was uploaded, the Animal Welfare Services inspected the park and revealed that most animals there were "distressed," according to Global News. The Dolphin Project also responded to the revelation in a tweet that read, "A disturbing video of orca Kiska has emerged. It shows her repeatedly bashing her head against her MarineLand tank- a type of self-harm that has killed captive cetaceans in the past." Whale and Dolphin Conservation's end captivity campaigner Rob Lott expressed that the behavior "is a direct, stress-related result of wild-caught Icelandic orca, Kiska being raised in an artificial, concrete environment for the last four decades." According to Mirror, he added, "Sadly, this isn’t unique and the repetitive, self-inflicted behavior shown by Kiska has been seen in other captive orcas where years of boredom in barren, featureless tanks with little or no stimulation manifests itself this way."

Or put it in loop for 42 years if you’re Kiskahttps://t.co/nQ40jYYymQ

"Chronic stress can compromise captive orcas’ immune systems and physiology causing illness and sometimes death. Kiska has been without an orca companion since 2011 and is deprived of every aspect of the social culture she would have experienced in the wild. Orcas, and indeed all whales and dolphins, are extremely poor candidates for life in captivity," he explained according to the Daily Star. A GoFundMe page was set up by Demers to help marine mammals. Please click here to donate.