Travolta posted a sweet tribute to his young son. 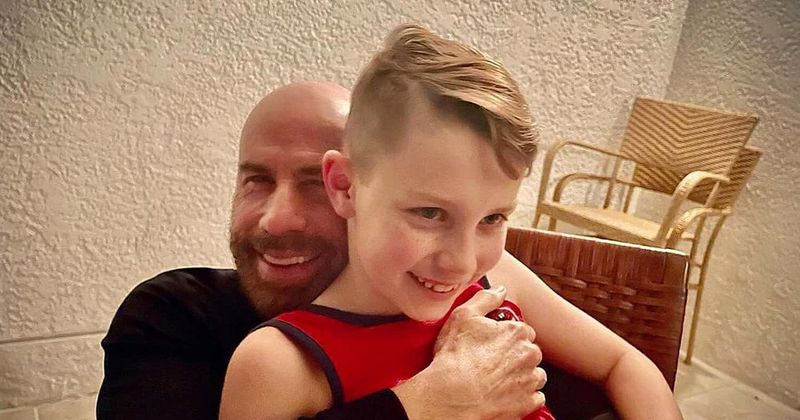 The Travoltas are finding healing moments of joy in their lives after tragedy struck the family in July, when Kelly Preston died of cancer at the age of 57.  The actress had lived with the disease for two years before passing away on July 12. Despite the heartbreaking loss, Travolta remembers his wife of over 28 years as someone who "fought a courageous fight with the love and support of so many."

A family representative said, "She was a bright, beautiful, and loving soul who cared deeply about others and who brought life to everything she touched." The family is now healing and finding time to celebrate special occasions together. The couple's young son Ben just turned 10. Travolta, 66, shared a sweet snap of the father and son wishing him a happy birthday.

Big sister Ella also wished her baby brother, posting a solo shot of the birthday boy on a boat. The 20-year-old wrote: Happy Birthday Benjamin!!!! To the sweetest boy in the world, I am so lucky to have you in my life. Even though I am your older sister, you continue to teach me so much every day. You are my best friend and I love you to the moon and back. Ella has previously posted a number of videos with the whole family wishing followers on special days like Christmas and New Year's.

The family is no stranger to tragedies. Back in April, John Travolta and Kelly Preston shared heartfelt messages in memory of their late son, Jett, on what would have been his 28th birthday. Jett, who was autistic, was only 16 years old when he passed away in 2009. The couple took to their Instagram to share old, touching pictures of them with their son. Travolta posted a black-and-white picture of himself and Jett smiling at each other. Kelly and her son are seen in a warm embrace in her tribute.

The family powered through despite the many heartbreaks. The star and his family set up the Jett Travolta Foundation in 2009 in honor of their Jett, who had autism, to help children from a variety of disadvantaged backgrounds. Preston once shared an emotional Instagram post to raise awareness about the autistic community. She captioned a touching photograph of a smiling Jett with his parents: To my sweet love, Jett... you are in our hearts forever. I send love to all of the beautiful autistic children and the wonderful people who love them. May we all shine and grant love and respect to children with special needs💕 #autismawareness #autism.

The couple had had to storm many battles in their long-lasting relationship of more than 28 years. The couple first met in 1989 at a screen test for their 1989 comedy, The Experts. At the time, Preston was married to her SpaceCamp costar Kevin Gage in 1985 but she always knew was with the "wrong person". That marriage ended after two years. When asked by Andy Cohen on Watch What Happens Live if it was love at first sight when she met Travolta, Preston said, "Kinda." "Well, I was not that happily married, let’s put it that way," she continued. "I was really with the wrong person." Once she was single again, the two began dating. Travolta got down on one knee in 1991 on New Year's Eve inside the Palace Hotel restaurant in Gstaad, Switzerland. They never looked back since.

From their wedding day to the birth of their beautiful children #KellyPreston https://t.co/vj0ehbEd4k

Two years after Jett's death, the couple welcomed another little boy Benjamin, who helped the family find love and joy again. “Certainly having little Ben has been a beautiful kind of glue for us to rebond after tremendous loss,” Travolta said in an interview with Good Morning America, as per PEOPLE. When Ben was born, John, Kelly, and their daughter Ella Bleu were "ecstatic and very happy about the newest member of the family,” they said in a statement at the time. “Both mother and baby are healthy and doing beautifully.” “I’ve been cleaning out everything in the house,” Preston said in September. “Ella has been helping too. She’s looking forward to being a big sister.” “He’s given the house a renewed spirit and purpose,” the actor shared with PEOPLE in 2011. We do hope the Travolta family finds that spirit and sense of purpose yet again.