Parton had previously made a hilariously NSFW quip about her husband's wishes. 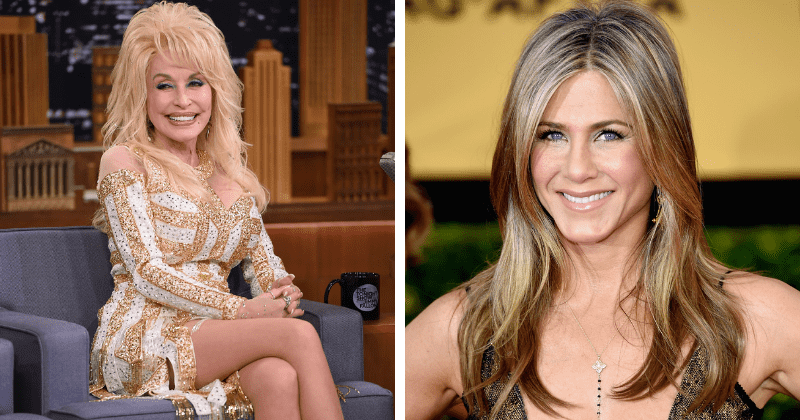 I laughed so hard I cried 😂😂😂😂
You truly are a legend

The country music legend had appeared on the show to talk about working on the soundtrack for the Netflix film Dumplin' which starred Aniston. Things took an NSFW turn when Parton revealed just how excited her husband of 54 years, Carl Dean Thomas, was that she was working with the film's star and producer, Jennifer Aniston. The icon candidly said of Aniston, “I love her to death. My husband is crazy about her, and he was more excited that I was going to do a movie with her than he was that I got the chance to write all this music. I think he fantasizes, like, a threesome.” She then went on to say, "He can't even get it out to pee, much less get it up for three." Fallon of course collapsed in laughter and so did everyone else.

This will go down as a top 5 best moment in late night TV history!

Did Parton get in trouble with her husband for the quip? Parton revealed that he had also found it pretty funny. He's known Dolly for so long, he probably wasn't surprised that Dolly was just being Dolly. Parton revealed, "My husband he thought that was a hoot and he said 'Well maybe I couldn't do a threesome but I think if it is Jennifer I could do like a two-and-a-half'." Parton's husband has always preferred being out of the spotlight and never appears at public events with Parton. “I always joke and laugh when people ask me what’s the key to my long marriage and lasting love,” she told PEOPLE. “I always say ‘Stay gone!’ and there’s a lot of truth to that. I travel a lot, but we really enjoy each other when we’re together and the little things we do.” Parton also looked back on their early courtship, saying, “When I met my husband, he wanted to take me out to dinner. He pulled up to the drive-in window and got our food at McDonald’s … We know a few little places we can go without being bothered. He only likes to go places where he can be comfortable!” she recalled. She is most grateful that Dean sees her inner beauty. “He doesn’t care what I wear as long as I’m happy,” said Parton. “He loves me the way I am.”

As for what Jennifer Aniston had to say about the threesome quip, the 51-year-old told USA Today, “My mouth just dropped. And then I laughed my (butt) off. That’s Dolly." She added, "It was hilarious, I think it’s flattering. And that’s Dolly's sense of humor,” said Aniston. “No one in the world can get away with saying anything like that about their partner on live television, except Dolly. I mean, that is a quote." The pair have laughed about the line together ("It's been discussed all day, shall we say"), they haven’t put aside any date. “That was just talk-show fodder,” said Aniston. The two are great friends and even pen pals. Dolly doesn’t text. Instead, she writes letters. “They’re beautiful, all on stationary with this Dolly (letterhead). She’s so old-fashioned,” said Aniston. “I give her a phone call back after she writes. I like talking to her on the phone.”