trending celebrity people lifestyle news animals
People Are Losing It Trying To Find The Panda Hidden In This Heavy Metal Crowd, Can You Spot It?

People Are Losing It Trying To Find The Panda Hidden In This Heavy Metal Crowd, Can You Spot It?

While many found it hard, some spotted the Panda right away. So which group do you belong to? 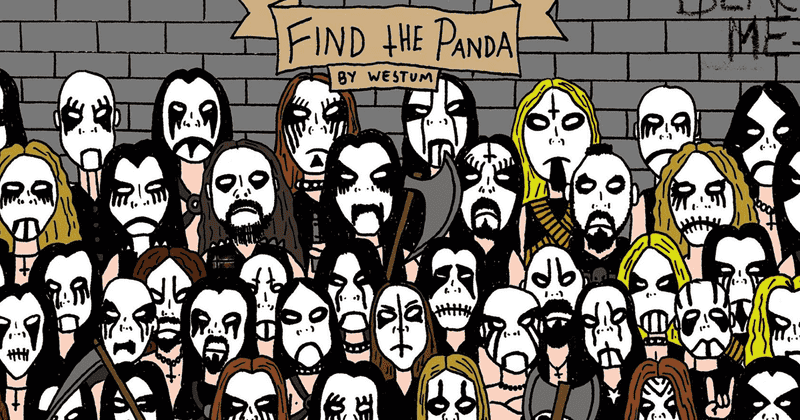 Are you a sucker for puzzles? Well, you're going to love this one. Epsen Westum has designed a "where's waldo" sort of visual puzzle that's going to drive you mad. The internet's already all over it. Instead of Waldo, you'll be looking for a panda that's hiding among heavy metal artists. Epsen Westum, who's the head brewer at Westum Hjemmebryggeri, from Fredrikstad, Norway, had initially designed a panda hiding amongst the snowmen. After that visual went viral, Westum designed the panda among heavy metal artists and we can assure it takes a while before you get there.

He posted the image on Facebook and wrote, "Most people have seen the “find the panda among snowmen” picture. I was inspired to make one myself, only with black metal artists. After drawing most of the day, here is the result! HAILS!” The post has been shared more than 8,000 times. He had posted the image a while ago, he only recently made the post public, and it went viral.

Here's the image, see if you can spot the answer

Some complained it was too easy, while it took longer for others. Rodrigo Bosio Barraquer wrote on Facebook: Easy but so awesome! Great job with the drawing. Espen Westum replied: Yeah, I made it just for fun. Not to be a big challenge. Westum became popular on the internet and won a whole set of new followers. Quentin Bourg suggested Westum should have "put a storm trooper in it and see if anyone noticed." To be fair, it wouldn't be easy to spot a stormtrooper amidst all the black and white. Westum certainly did well to hide the panda among the heavy metalheads in what looks like an underground metal club.

If you've given up, here's the answer!

If you're an ardent Stephen King fan, here's a bonus puzzle for you! The image below is filled with Stephen King references, let us know how many you can spot. Titled King County, the image first spotted on Gizmodo is designed by Jordan Monsell reportedly has over 170 references from Stephen King’s books. While Hollywood and the TV industry might have only just woken up to King's genius, he's always had his share of hardcore fans. If you're one of them, let's see how you fare. The obvious easy ones are Pennywise (from IT) and Cujo. So give it a shot and see how many you can spot. Don’t worry, we have all the answers for you at the end.