trending celebrity people lifestyle news animals
5-Year-Old Boy Gets Handcuffed By Cops In Disturbing Video: “Does Your Mama Spank You?"

5-Year-Old Boy Gets Handcuffed By Cops In Disturbing Video: “Does Your Mama Spank You?"

Officers yelled at the Black kindergarten student, inches from his face, calling him a “little beast.” 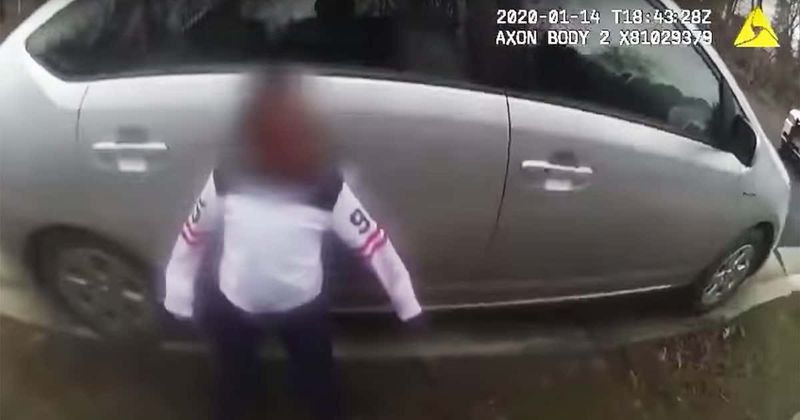 A horrifying and heartbreaking 50-minute video from an incident that took place in January 2020 has emerged and is now sparking outrage among netizens. Maryland police officers can be seen screaming at a 5-year-old Black kindergarten student. “Does your mama spank you? They need to spank you today,” one officer tells the boy while he cries. “I would have been beaten nine times before I got home. Don’t nobody want to hear that, ain’t nobody listening." The little boy had allegedly left school without permission. After police found the boy, they can be seen treating the child who is just 5, extremely aggressively. The Montgomery County Police Department released the disturbing video on Friday.

Will, this is absolutely heartbreaking. I didn't even get to the parts that have already been reported and I was horrified and in tears.

According to NBC News, Montgomery County Council member Will Jawando said in a tweeted statement: I watched in horror as what can only be described as a nightmare unfolded for nearly an hour. It made me sick. The conversation between the cops and the child went like this: "Listen to me. How old are you?" a cop asks the boy. "Five," the child responds. "Five? You feel like you can make your own decisions?" the police officer asks. "You feel like you can do what you want?" The two officers grab the child and forcefully put him in the back of their police car. The child can be seen getting agitated and starts to cry. "You better stop," police say to the child. The boy seems inconsolable. The cops repeatedly tell him that he is "bad" and should be beaten. “Does your mama spank you? She’s going to spank you today,” one of the officers can be heard saying.

"I watched in horror as what can only be described as a nightmare unfolded for nearly an hour."

The child is later seen crying in a chair, when one of the officers leans down and screams into his face, trying to get him to stop crying. When the child's mom arrives, in another bizarre move, a police officer takes out a pair of handcuffs and places the little boy's wrists inside them. "You know what these are for? These are for people who don't want to listen and don't know how to act," the officer tells the boy.

The 51-minute body camera video, which the Montgomery County Sheriff's Office released Friday, sheds new light on an encounter that's now the subject of a lawsuit filed by the boy's mother. https://t.co/1eXmpaticN

The boy’s mother filed a lawsuit earlier this year against Montgomery County, Montgomery County Public Schools, and the Montgomery County Police Department. She is seeking compensation and justice for the child’s trauma as a result of the harrowing incident. “Our heart aches for this student. There is no excuse for adults to ever speak to or threaten a child in this way,” Montgomery County school officials said in a statement. “As parents and grandparents, we know that when families send their children to school, they expect that the staff will care for them, keep them safe and use appropriate intervention processes when needed.”

What's more shocking is that Montgomery County police said in a statement that both officers remained employed with the department following an internal investigation. Community organizers have put together an open letter calling for the cops involved to be suspended or fired. "The incident made national news, but over a year later, it has not been fully addressed. This delay in accountability is unjustifiable and unacceptable," they said in the letter.

This poor baby is now going to need YEARS of therapy to recover from the trauma that adults (who had no business being there in the first place) inflicted on him! This is reprehensible and serves as another reason why we must #defundthepolice https://t.co/y3TvtxCwV3

The mother's lawyers have said that the boy suffered emotional trauma. "There is a certain way to treat a 5-year old boy," said James Papirmeister, a lawyer for the family, according to CBS News. "Needing to beat him, like I said, came up at least 15, perhaps 20 times." "All I can tell you is beat that a**," the officer says in the video. "That's all I can tell you. You can beat your child in Montgomery County, Maryland. In front of him and everybody else you can beat him." The officer later adds, "And please don't leave no cuts or crazy cigarette burns, nothing like that. We're good, alright? Meeting adjourned." The Montgomery County Police Department revealed that it has investigated the incident, but the department has not released the findings. Both officers are "still sworn officers," according to the department.

And lectured his mom, contrary to morality and law, that she needs to beat her kids more.

I'll trust law enforcement to enforce the law when they follow the laws.