Ruth Brandspiegel and her childhood friend Sasha Eisenberg lived within 60 miles of each other for years without knowing it. 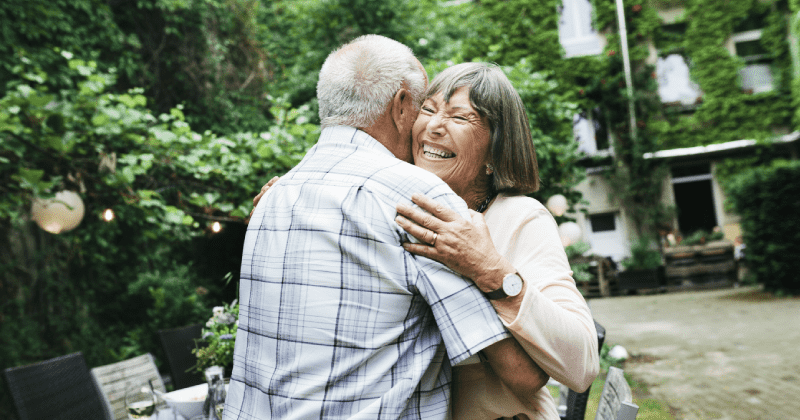 When Ruth Brandspiegel heard the name Sasha Eisenberg called out during a virtual Yom Kippur service, she did a double-take. It had been 70 years since she last saw her childhood friend. It was when their families escaped the Nazis and crossed over to the Soviet Union. It surely couldn't be him, she thought. After a few inquiries, she found out it was indeed him. The Holocaust survivors Ruth Brandspiegel and Israel “Sasha” Eisenberg, 79, met over an emotional Zoom call and called the virtual reunion a "miracle", reported Associated Press. Ruth and Sasha's families came from Poland before escaping to the Soviet Union. Their families ended up at two different labor camps in Siberia before meeting at Hallein Displaced Persons Camp in Austria, where they became really close. The duo had met last in 1949 but was living many years within 60 miles of each other without ever knowing it. Until this Yom Kippur.

Ruth and Sasha might never have met, hadn't it been for the Coronavirus pandemic. Both had attended the Yom Kippur prayer service organized by a synagogue in East Brunswick, New Jersey. Sasha's name was called out during the service only because his wife of 53 years, Marsha, wanted to give him a shoutout as a form of appreciation. After hearing Sasha's name, Ruth asked her son, Larry Brandspiegel, a cantor at the East Brunswick Jewish Center, to see if this was her childhood friend Sasha. “I said to myself, Sasha? I know there’s a lot of Eisenbergs, but Sasha Eisenberg? How could that possibly be?” she said. Ruth still had a photo of them and shared it with her son. Larry contacted the family and finally confirmed that it was indeed him and organized a virtual call.

“Holocaust survivors meet again after 71 years in 'miracle' reunion. Israel "Sasha" Eisenberg and Ruth Brandspiegel are reunited on Oct. 3, 2020, in East Brunswick, N.J. for the first time in more than 70 years.” https://t.co/mdmQBiT1t4 pic.twitter.com/hww698BhZH

“I even didn’t know that Regina (Ruth's original name) was in America!” said Sasha. "It’s 70 years and I was a child. ... So I called it a miracle.” Ruth refers to Sasha as "Mishpacha", the Hebrew word for family. It was Ruth's father who guided and comforted Sasha when the latter's father died in a car accident in 1948. Sasha recalls her father reciting the Kaddish, the Jewish prayer for the dead, with him to help him cope with the grief. “A thing like this, you don’t forget,” he said, recalling those times. While Ruth’s family moved to Philadelphia in 1952, Sasha's family first moved to Israel, before moving to Brooklyn in 1964. After the initial virtual reunion, Ruth’s son hosted a socially distanced gathering at his home in East Brunswick. It felt like a trip down memory lane for both families as they discussed their past, their memories, and looked at black-and-white photos. It was an emotional night for everyone involved.

Ruth Brandspiegel was visiting her son in New Brunswick, NY so instead of her regular service, she logged on to his for Yom Kippur service. In that virtual Zoom service, a familiar name was mentioned: Israel “Sasha” Eisenberg — (1/2) pic.twitter.com/UJlaKGKx95

Earlier this year, the world celebrated the 75th anniversary of Auschwitz's liberation by the Allied forces. It was on Jan 27, 1945, that the Soviet Army seized control of Auschwitz from a handful of German soldiers guarding the concentration camp. To mark the momentous occasion, hundreds of men and women had gathered earlier this year in southern Poland to honor those who died during the war. According to ABC News, an estimated 1.1 million people, mostly Jews, were killed at Auschwitz I and nearby Auschwitz II-Birkenau, in gas chambers, from systematic starvation, and forced labor.

"Auschwitz itself bears witness to what happened," said Ronald Lauder, president of the World Jewish Congress. "Auschwitz is the symbol. We can't let that symbol go away." Tova Friedman, 81, who was just 5-and-a-half years old when she arrived at Auschwitz, returned to the site earlier this year. Friedman said she had wanted to make the trip to Auschwitz to pay tribute to those who died at the camp. "We remember you and we're so sorry and we'll keep your memory alive," said Friedman, before adding, "The world needs to know and to be aware of the evil, to stop the evil before it spreads. This is the end of evil. This is what it is. Like somebody once said, you start burning books, and then ... you burn people. ... This is (the) end of evil."