Among the finalists for "The Stuck at Prom Scholarship Contest" were five dresses and five tuxedoes who made the cut from hundreds of submissions. 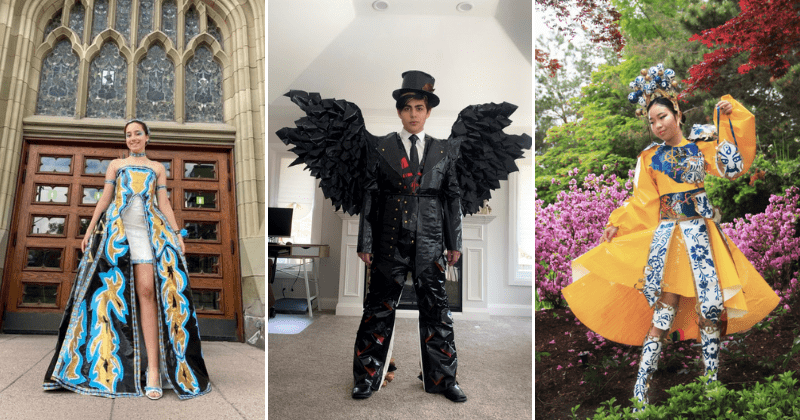 We all know duct tape is as versatile as craft items get. Taking this to the next level of crafty is the brand Duck Tape that has designed a scholarship called "The Stuck at Prom Scholarship Contest" around its versatility. Every year they give away $20,000 in cash scholarships to high school students across North America who make the best prom attire out of only the Duck Brand duct tape. This year too, there were plenty of submissions from students creating stunning dresses and tuxedos using only duct tape. Among the finalists are five dresses and five tuxedoes who made the cut from hundreds of submissions.

One among the finalists is Erika Avellaneda from Ottawa who created an elaborate two-piece dress inspired by ancient Egypt, Greece, and Rome. “It’s not like your average scholarship where you have to write essays, so I thought it would be super fun,” Erika told CTV News. She worked for a total of 143 hours and used 17 rolls of duct tape to create the dress. Describing her entry she said: "When I first started my inspiration was the white academia aesthetic. I pictured this dress being worn in a big architectural baroque castle ballroom dancing to classical music, like the ones you see in Rome and Greece. Originally the dress was fully white, but I was also inspired in doing a black-on-white clash."

Gr 9 Erika Avellaneda made this stunning prom dress out of 17 rolls of duct tape, for a chance to win scholarship money. Hear how she did it on 91.5fm CBC LISTEN App https://t.co/elsZEblOEA pic.twitter.com/mCovIJAH6c

Erika’s sister Claudia expressed how proud she is of her sister. “I think it's incredible. I’m completely obsessed with it. Erika is a little shy, but she’s so creative. This is kind of like her way of speaking out and showing all the incredible designs that are in her head.” She added, “Everything I do is for Erika. She is such a queen. I’m so proud of her and she's only 15 years old. A lot of the other finalists are in their senior year in high school.” Her mother, Dillon, also shared that Erika is a natural when it comes to art and design. “I think the dress is stunning. I think it's a real masterpiece,” she said.

Dillion went on to say, “Erika has always liked the idea of castles, ballroom dancing. For me, it gave a child the chance to get out of her head—you know, the worries of the pandemic and school and not completing your courses—and do something physical with her hands. So I think that was a huge benefit.” She is one among two other Canadians who made it to the finals. The two others are Meihuan Yu and Ryan Bekic from Ontario.

"My design process was totally inspired by my culture," Meihuan, who designed a splendid dress inspired by Chinese performance art and opera, told CBC News. It took her 186 hours and 23 rolls of tape to make the dress. She even included a short poem she wrote with her entry and stated: "Stuck at home and infinitely dreaming of travel, I realized that delving into the art of my own culture can provide the same feeling of exploration. Looking within Chinese culture, I was in awe and fascinated by the complexity of Chinese performing arts, especially a type of opera from Beijing called 'jing ju.' Complete with brave masked warriors and powerful animals, I knew that a message of courage can be conveyed perfectly. With a pencil and my sketchbook, I started a process of visualizing courage."

The other finalists were Giles Ferrell from Virginia, Zaineb Aljumayaat from Nebraska, and Larissa Leon from Washington. As for the tuxes, the finalists were Aaron Leal from Texas, Vaughn Westerman from Michigan, Casey Alferink from Iowa, and Zoe Tibbs from Florida. You can take a look at their creations here. The voting has ended but the results will be announced on July 21. You can check here for the announcement of the winner of the $20,000 scholarship.