Images of about 80 female students were edited, but the boys’ pictures from the swim team remained untouched 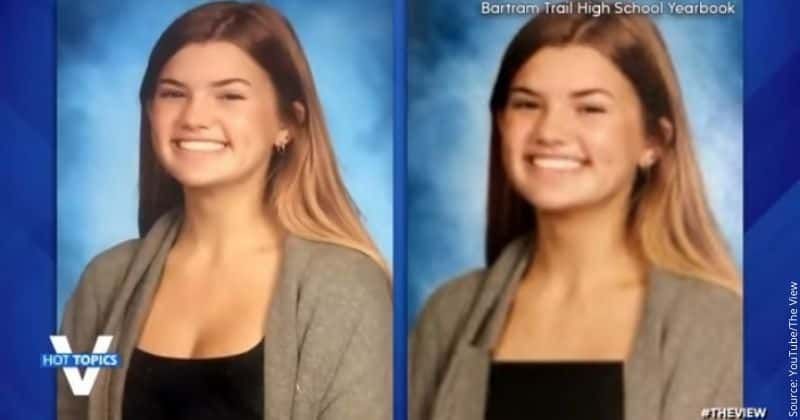 A high school in Florida is facing some serious flak for its conservative approach. The Bartram Trail High School in St. Johns County had made edits to pictures of around 80 female students, adding more clothes to the picture to cover up traces of cleavage. According to New York Post, the modifications have been made based on the district's claims are students "out of dress code."  Meanwhile, the boys' pictures from the swim team and other sports photos were left unedited, per Bored Panda. Even more shocking was the fact that these changes to the yearbook photos were made by a female teacher.

This is a before and after yearbook photo taken of Bartram Trail 9th grade high school student, Riley O’Keefe.

She says it was deemed inappropriate by the school and photoshopped in the printed edition.

Parents and students are now asking for a major change.@ActionNewsJax pic.twitter.com/f8MjkZMDOw

The news about the images being photoshopped spread on social media after a reporter, Ben Ryan of Action News Jax, shared his investigation on Twitter. In his first tweet, he shared the image of a student before and after her photo underwent some major editing. "This is a before and after yearbook photo was taken of Bartram Trail 9th grade high school student, Riley O’Keefe. She says it was deemed inappropriate by the school and photoshopped in the printed edition. Parents and students are now asking for a major change. You’re not only affecting their photo, it’s not just for protecting them, you’re making them uncomfortable and feel like their bodies aren’t acceptable in a yearbook," wrote Ryan.

When I reached out the school for answers, I was given the following statement:@ActionNewsJax pic.twitter.com/04Y6ULFLzY

He added, "She isn’t the only one. We looked at the yearbook and after speaking with several parents and students, they all said at least 60 pictures, if not more, were photoshopped/edited." O'Keefe also said that the edits were really unfair, given how it was only done to the girls and not the boys. "The double standard in the yearbook is more so they looked at our body and thought just a little bit of skin showing is sexual. They looked at the boys, for the swim team photos and other sports photos and thought that was fine, and that’s really upsetting and uncomfortable."

Both parents & students say they followed it and didn’t get dress code violations when wearing the same outfits before.

One mom told me her daughter wore it “like 50 times and never got in trouble.” pic.twitter.com/J20BAkQ7VG

Most of the photos shared by Ryan showed the girl students wearing tops that were either scoop neck shirts and v-neck sweaters. It just so happens that a crease is seen when breasts come together, and it just a natural thing. None of the students appeared to have worn plunging necklines, so for the school to take such as an action, is well, bizarre. A 9th-grade student, Zoe Iannone told Action News Jax, that she was well within the dress code rules at school, and was happy with what she wore. "When I sent it to my mom and all of us saw it, I felt very sexualized, like that was what they were worrying about," she said, following the edited photo debacle.

The school also released a statement saying that the changes were made without consent as this was the only way to ensure everyone was included in the yearbook. "Bartram Trail High School’s previous procedure was to not include student pictures in the yearbook that they deemed in violation of the student code of conduct, so the digital alterations were a solution to make sure all students were included in the yearbook. At this point, the school is offering refunds to any parents calling about this issue. The school is receiving feedback from parents/guardians/students on making this process better for next year."

#NEW: The female teacher in charge of the yearbook club made the decision to edit the photos on her own.

No pressure from “above.”

A district spokesperson says edits were made by her and the help of one or two students.@ActionNewsJax pic.twitter.com/2v3md4QSsx

No one from the school was willing to talk to the reporter or give him a clear-cut answer as to why they chose to photoshop clothes onto the students after the photos were taken. "So far, no one connected to the school has spoken up, while the 9th-grade students are speaking out for change." The students shared that they felt "embarrassed, ashamed and sexualized" following the digitally altered fiasco. Finally, after days of persuasion, the St. Johns County superintendent addressed the issue only after 80 girls’ yearbook photos were edited. "It was never the intent to embarrass or harm any of those students," they said.

#NEW: The female teacher in charge of the yearbook club made the decision to edit the photos on her own.

No pressure from “above.”

A district spokesperson says edits were made by her and the help of one or two students.@ActionNewsJax pic.twitter.com/2v3md4QSsx