The 4-year-old was upset his Nintendo Switch controllers weren't charged but his elder brother guided him out of throwing a tantrum. 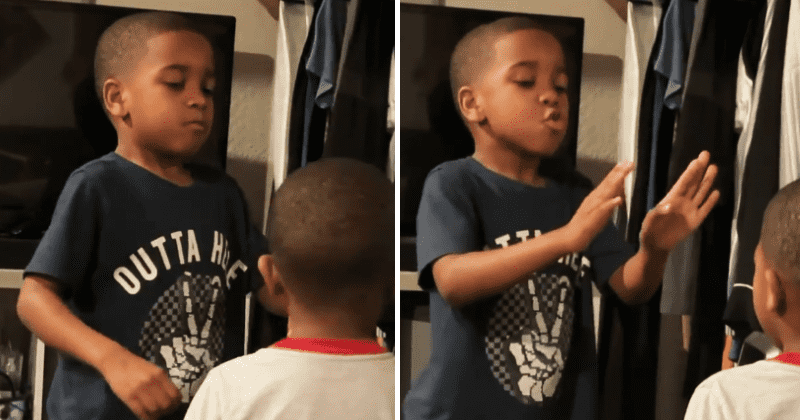 As any parent will tell you, stopping a child from throwing a tantrum is a near-impossible task. We've all been taught as kids to count to ten, or to breathe in and out, as a coping mechanism to combat our own anger. A 6-year-old shows how it's done. A sweet video captured by a mom from Los Angeles, California, showed her middle son teaching his younger brother, who's 4, the deep-breathing technique to cope with a tantrum, reported Good Morning America. The video has since gone viral on Instagram and has been viewed more than 180,000 times. Ashley West, the mother of the three boys, had her interest piqued as she saw her 6-year-old son speaking very seriously to his younger brother, Noah. Cory, 4, was crying because he couldn't play Nintendo Switch as the controllers hadn't been charged.

Noah tried to calm his brother before leading Cory through a set of breathing exercises. Cory resisted initially before listening to his brother and slowly calming down. Ashley West, 30, captured the touching moment on camera before sharing it online. West revealed that she had been trying to teach her kids emotionally healthy coping mechanisms, but this was the first time she was watching one of them try it to help their sibling. "That kind of prompted me to record it," said West. "I'm like, 'Oh my god this is so cute. You're actually listening to me.'"

West is doing her master's degree in social work, and is trying to apply what has worked in the field at home. West said it's important to make sound decisions by staying on top of your emotions, which can be incredibly hard when your emotions are heightened. West said this will help people develop healthier behaviors as they grow up, making them better individuals. She is already guiding her children towards becoming well-rounded individuals and Noah guiding Cory through breathing techniques was one of the first signs of that. "I didn't realize how much it could be applied in my own home until I actually started trying to do it and that's kind of where that came from," said West of the skills she learns at work.

West shared the video on Instagram and said it wasn't a yardstick for parenting. "I really was not expecting this video to blow up the way it did! If you know me then you know the kids and I are ALWAYS meditating and practicing controlling our breathing/managing our emotions. It wasn’t posted to validate “good” parenting or brag for that matter, and I’m only addressing this because some of these comments are INSANE trying to analyze full content in a seconds video," wrote West before adding, "Keep breathing through your mess."

She also tries to set an example for them by practicing yoga and meditation. "They see me breathing and they see me trying to be calm and they do it to themselves. I encourage them to do it to themselves," said West. "I'm not a perfect mom, my kids aren't perfect kids, but they do watch me, they do see me. The energy that I give out, they give back to me and they give to each other."