The woman was seen coming out of her car and leaving her dog at the Orchards Park in Vancouver, Washington state 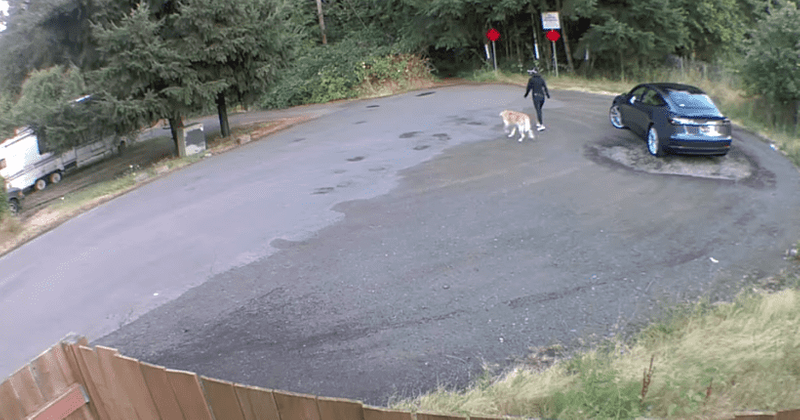 A cruel woman in Washington state thought she could abandon her dog in the woods without anyone noticing. Fortunately for the dog, a surveillance camera from a house nearby caught her in the act which was then circulated on social media and finally led the authorities to her. The footage was first shared by a pet service non-profit, I Paw'd It Forward, on their Facebook page after the owners of the surveillance camera found the alarming clip. It shows a black car parking near the edge of the woods. The woman gets out of the car then opens the back door for her dog who probably thought it was just being taken for a walk. "This woman thought the best way to get rid of a dog, was to take him to Orchards Park in Vancouver, WA tonight and leave him there to watch her drive off in her Tesla with Oregon Plates," read the post by the non-profit.

They added, "If you recognize this woman, her Tesla, or her dog, please contact us immediately...The dog is an older yellow lab. If you know a woman that drives a Tesla with Oregon Plates, who likes to wear spandex pants and owned a Yellow Lab, please, contact us PRIVATELY with any information." The organization said the dog was safe and available for adoption. "We know this tugs at our heartstrings, but please know he is safe and being cared for. We will do our best to update if/when he becomes available," the post stated. Once up, the video was viewed over 2 million times and liked 20,000 times while being widely shared. In later updates, the organization said the woman was finally caught merely. This was merely 24 hours after the video was posted.

This heartless individual willfully abandoned her dog at Orchards Community Park in Vancouver, WA. If you recognize this dog, the car, or the driver, please contact the investigators. https://t.co/LSiULA3Iv3

The update stated authorities had zeroed on a possible suspect and later wrote the dog's owner has been "identified and cited for Animal Cruelty in the 2nd degree." This was only possible because of the thousands of leads that they got from the public. "Thank you everyone for your incredible leads and tips! So many great leads and anonymous tips! Thank you everyone...We appreciate ALL of your efforts, leads, and most of all, love for this dog," the group added. In another post, I Paw'd It Forward told people who no longer wanted their pet, there were many "options" other than just abandoning them. "Instead of dumping your dog somewhere, offer him/her the same courtesy you offered him when you adopted him. If you need to rehome him, ok. But be patient. Find the right home. Reach out to the rescues in your area," they wrote.

They added, "Contact the Humane Society and schedule a surrender. If they say you need to wait your turn and it could be 2-3 weeks, wait. Do right by them. We humans fail more than we succeed. All of us. Animals can't fail. They can only do what we have taught them. They only know what we teach them. They only know how to love us. They don't know how to give up. They don't know how life changes effect us past how much more they need to love you. Give them the courtesy they have given you. If you can't keep your animal for whatever your reason, ok. But be humane. Be compassionate. Show them love in transition. They did not ask you to adopt them, that was YOUR decision. I am not asking you to change your life and keep him. I am asking you to change their life and give them the best possible chance at finding their forever, even if it is not with you."