The two had their heart surgeries on the very same day, eight years apart. 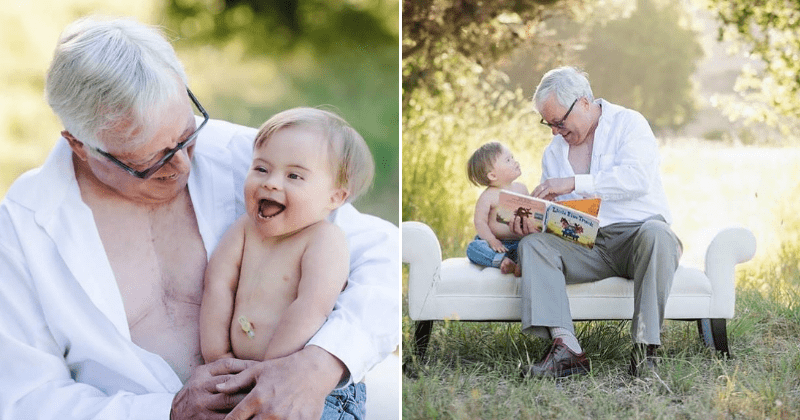 There's nothing more heartwarming than watching grandparents play and interact with their grandkids. That was precisely what Jim Simpson, and his namesake, James O'Leary, had as they had a notable event in their lives coincide on the same day. Both grandpa and grandson have surgical scars from their respective heart surgeries. The two of them had their heart surgeries on the very same day, eight years apart, and thus share an anniversary for the same. Larkin O’Leary, mom of James and daughter of Jim, took the photos a few years back but recently shared them on social media.

"These photos mean so much to me for a few important reasons," she told Good Morning America." "First, because there was a point in time when I didn’t know if my dad or son would live. They are photos of survival and strength. These photos also capture the indescribable bond my father and son have." All the photos were taken by Lindsey Tatum and they are nothing short of delightful. "I first met James when he was just a few weeks old," Tatum said. "It has been an honor to capture these special times in his life." "James and his grandfather have an undeniable bond and their love for each other is palpable. His eyes light up when he sees his grandpa," she added.

Larkin O'Leary, who is also the president of the nonprofit Common Ground Society, said she founded the organization because of the strength of her son. James has Down Syndrome and has had 28 surgeries in his life already. Her son, she noted, is "a bright light in this world." "The photos are also important because they capture the beginning of the roller coaster of a life we now have," O'Leary said. "Both my son and dad have taught me just how precious life truly is. “I also had a few families reach out and remind me how lucky I am to have the support and love of my family. For many families who have children with disabilities, they are ostracized and abandoned upon diagnosis,” she said “It can be so hard. This is why we started our nonprofit,” she continues. “To educate our community and provide support for families.”

Grandpas and their grandsons often share a special bond, but for Jim Simpson and his namesake, James O’Leary, their bond has a physical element that's easy to see. https://t.co/U6jeQc4ME1

"50% of people born with Down syndrome have heart issues. Some people with DS have other medical issues, some people with Down syndrome have zero medical issues. It varies person by person, just with typically developing people." the society wrote on a Facebook post. James is currently studying elementary school in California, and even though his life may have started out rough, the pure joy on his face says it all. This toddler loves to play and hang out with his grandpa and this relationship has been a source of happiness for the entire family. “People who have heart surgeries have a ‘heartiversary’ and I thought it was so special that they shared the same heartiversary,” Larkin O'Leary told CafeMom.

“The first time I saw my son was on an iPhone while I waited for them to stabilize him and me,” she tells us. “When I was wheeled in to meet him almost two hours later, they gave us the news that he had a heart issue that would require him to be transferred immediately to San Francisco, and they also suspected he had Down syndrome.” “In recovery, we almost lost him,” his mom explains. “He started spewing green out of his nose and alarms started ringing. He ended up having an undiagnosed web in his duodenum that required surgery just seven days after his open-heart surgery,” she added.