James Cowe, 23, who is gay said he earned his annual NHS salary in 22 days on the platform 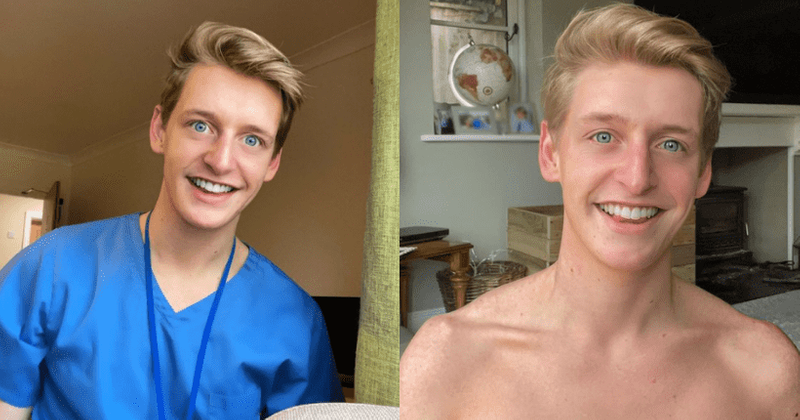 The pandemic has been hard on everyone. More so, with healthcare workers who have been on the frontlines who have been working around the clock. However, the appreciation for them has been few and far between especially when it comes to their salaries. In the UK, NHS workers have been working tirelessly, but they were left aghast when the government saw fit to increase their salaries only by 1 percent rather than the 15 percent that the healthcare workers asked for reports iNews. Insulted by this hike, one NHS worker named James Cowe, 23, quit his job as a medical assistant, where he worked for six years and turned to the content-sharing platform OnlyFans, popular in the adult entertainment industry. Here, creators offer videos, photos, and even chances to chat one-on-one for a price.

This move has earned him far greater pay than what he was earlier getting at his previous job. In a TikTok video where he addressed Boris Johnson, Cowe who is gay said he was forced to become an "online whore" now due to government policies. "With the pressure from the coronavirus pandemic causing all healthcare industries huge amounts of strain, I felt unappreciated and actually insulted," Cowe told Pink News.

As for starting an OnlyFans account, he said, "I am extremely grateful to OnlyFans as I feel this is potentially the start of a life-changing experience. After struggling with such low pay in healthcare, the future is now looking much brighter." Cowe who is originally from Bournemouth said he earned his previous annual salary as a health worker in just 22 days on OnlyFans. Becoming a healthcare worker was almost a natural career choice for Cowe since his family is into the business of caregiving. He said, "I started working in healthcare when I was 18-years-old, originally for the family business which was a private home for dementia care where I worked as a healthcare assistant."

He added, "I worked there for two years before moving on to work for another private home that cared for advanced dementia and specialized in end of life care for the elderly. Working as a healthcare assistant in this industry is extremely rewarding at times but also comes with very high pressure and responsibility. I worked a total of six years in the healthcare industry and I found the workload to be increasingly demanding and exhausting for very little pay at the end of the month."

He charges $11.99 a month for every subscriber and the money has just been coming in. "Starting OnlyFans is by far one of the best decisions I have made in my career to date. I originally studied social media at Bournemouth and Poole College, which I’ve always had a passion for," said Cowe.

He was skeptical at first about making the shift but he has worked hard in making his content.  "Over the past year, I have spent hours building and creating content for my Instagram account and always liked the idea of becoming a full-time influencer. The influencer industry is extremely competitive and I originally struggled to find a way to market myself, knowing I was reaching a large audience, but unsure on what to sell this audience," Cowe noted, adding the crowded market seemed intimidating at first. Yet, despite this, he reached 7,000 subscribers within a short time. Surprisingly, he is not the only one. BuzzFeed reports that a number of nurses were increasingly turning to the platform due to low wages and long working hours.

"I feel like I’m walking on a tightrope with being blindfolded while holding two pounds of oranges... No matter where I’m going, I’m either going to fall to the right or to the left, but I have to keep going straight," said Clara,22, a former patient care assistant in Florida who got into the platform recently.