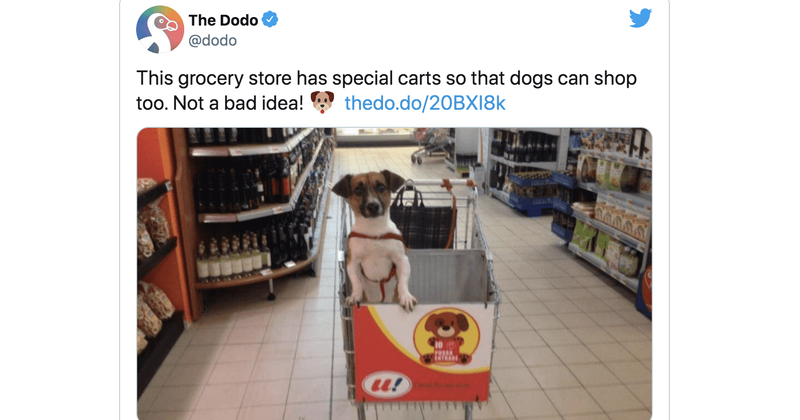 Have you been pretty upset about leaving your dogs outside while you go into the grocery store to shop? Or the thought of leaving your pooch behind when you have to run errands fill you with dread? Well, if you live in Italy that won't be an issue. A supermarket has found a solution to the problem! They've created a dog-friendly shopping cart! So now dog owners can shop at ease knowing well that their dogs are in safe hands. Unes is the name of the store located in the Italian city of Liano. The owner of the store, Gianfranco Galantini, came up with the innovation after seeing a lot of dogs outside his store waiting for their owners.  Galantini decided to ease the shopping experience for anxious pets and their parents by letting owners bring their dogs inside. The store designed special carts fitted with a partition and a flat surface at the bottom for the animals to comfortably stand or sit on. This allowed owners to put their smaller dogs in the cart so they could ride along while the owner shopped for groceries at leisure.

This Grocery Store Outfitted Its Carts With Compartments For #Dogs! https://t.co/ipObAazVlP pic.twitter.com/3xuJJyluoP

Galantini told La Repubblica, according to Ceasar's Way, "The owners of small dogs can now avoid having to leave them outside, giving them peace of mind to take all the time they need to make their purchases. The initiative launched just recently, but we’ve already noticed how much our customers appreciate it." The seating area from each cart is removed and cleaned after each visit, so one does not need to worry about cleanliness.  This special doggy cart has been a hit with pet parents and the pooches themselves. The only downside, Galantini recalled, is that only one dog barked when he was placed in the cart.

I think this is awesome 👏🏻‼️

According to The Dodo, smaller dogs were always allowed inside these types of stores but they had to be under control. These carts just make the process easier and more convenient for both owners and dogs to feel safe.  So far everyone has been responsible, only bringing in well-behaved pups and keeping everything clean, so there haven't been any major problems. Speaking of the one dog that did bark, Galantini said the dog "calmed down immediately" once the ride got going.  The idea has been such resounding success with people that the Unes corporate management has reached out to Galantini about the possibility of introducing the carts to other store locations across the country. Now, one can only hope this idea will become international!

In a similar instance of dogs and grocery carts, a German Shephard was seen pushing a grocery cart on its hind legs around a California supermarket.  In 2017, Isaac Hughes, then 55, and his 6-year-old German shepherd made headlines. "My dog will push the cart all the way into the aisle and he can turn corners," Hughes told Inside Edition. "He can do it for more than a full minute. Sometimes when people walk with a cane or a walker, they can get things into the cart but pushing the cart a long way is hard," he explained. "I can teach a bigger dog, if they give them the command, to take over. The key to training a dog is you show the dog mercy," he said. "Your hand of affection is heavier than your hand of correction."