Greedy Mother-In-Law Steals Meal Kits Meant For Poor Kids During Lockdown, She's Even Proud Of It

The woman said her mother-in-law stole meals that could have fed nine kids in total. 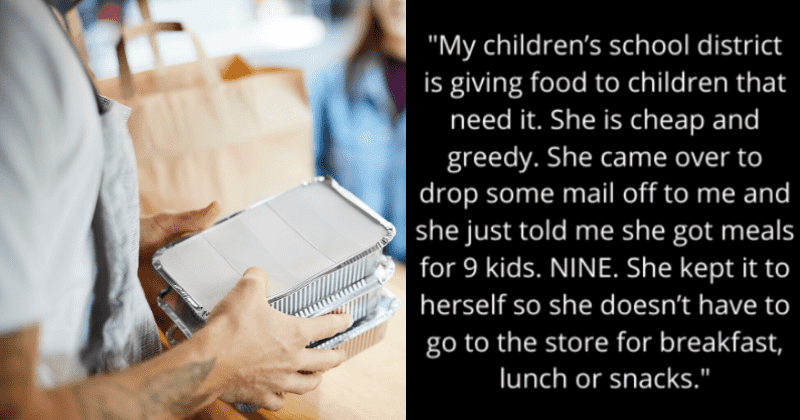 Many times, the relationship between a mother-in-law and daughter-in-law is not the most cordial. Sometimes the general dislike towards a mother-in-law is unwarranted and based on an isolated situation. But it is justified if she's a horrible person right? Like this Redditor who exposed her in-law in a post titled, "My MIL is okay with taking food for herself from another child." And before you think it's probably not what it looks like, no, it is exactly like the title suggests. But it is actually more than one child that the mother in law in question takes away food from.

Reddit user, u/RiverPriestess is a regular on the JustNoMIL subreddit on which she has ranted about her MIL's previous misdemeanors. She starts off her rant by writing, I’m back. I limit my contact with my MIL, so I haven’t had many stories lately. Which, i definitely am not complaining. I’m sure some of you are familiar with my MIL but those of you that aren’t, well, buckle up, she is crazy. She went on to explain the situation at hand. My children’s school district is giving food to children that need it. The child doesn’t need to be there to pick it up, no identification required either. I think it is amazing. My husband is considered an essential worker and he has been working 12-14 hour days. Our car isn’t running right now so between him working and our car not running, I cannot go to the meal pick up days. Which is fine, we have enough for our 3 children.

So far, so good. But this is when things start to get controversial. The user continued and writing about her MIL said, Well, she is...thrifty. No, that’s nice. She is CHEAP and GREEDY. she knows I cannot go so she has a going to the school meal pickups every week. She came over to drop some mail off to me and she just told me she got meals for 9 kids. NINE. That she kept to herself so she doesn’t have to go to the store for breakfast, lunch or snacks. She took food away from nine children. Three of which she claimed were ours, even though we didn’t get a single item. I’m just blown away. I don’t even think there is anything I can do about this since they don’t ask for ID and it’s being given away for free.

The grandmother-of-three indulged in this behavior unabashedly. The user decided to put an end to this and inform the school board about her MIL's selfish behavior herself, in spite of the uncertainty that they may not be able to identify her specifically among thousands of people who throng for the meal kits. The information has reached the people concerned and now the user is waiting to hear if action will be taken against the greedy old lady. As for Reddit users who read about the antics during a pandemic, they were not any kinder to the MIL.

Call the cops. She committed fraud and theft. End of story, wrote user satijade. Puppiesmommy took a step beyond and advised, When you contact the school board, give them her name, address, describe her vehicle and her license number. Then give all this info to the media, preferably TV. They will eat it up. No pun intended. Another user suggested shaming her on Facebook in the hopes to get her to stop. Melody4  stated angrily, This is absolutely despicable. What a disgusting human being. These "lunch ladies" are going out of their way and risking their health to provide for children that might otherwise not have access to adequate food and nutrition. I would call or email the district's director of food services (check your district website - they should have contact information) with a description of her car and license plate number as well as a description of her.