Greatest Met of All Time, Tom Seaver, Dies At 75

Considered to be one of the greatest pitchers of all time, Tim Seaver died peacefully in his sleep because of complications from Lewy body dementia and COVID-19 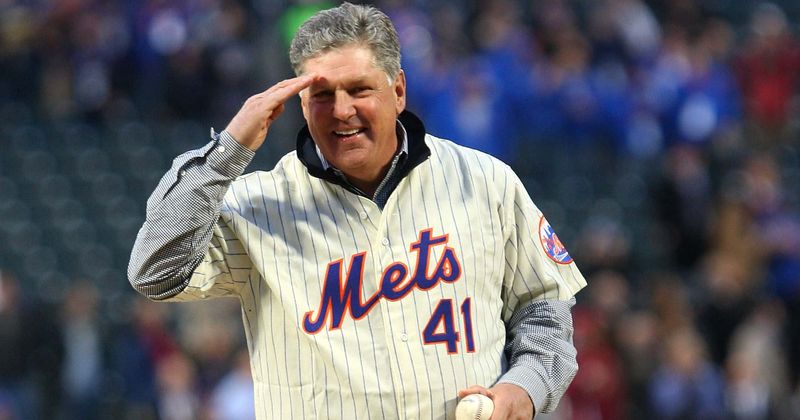 Legendary baseball pitcher, Tom Seaver, has died at the age of 75. He passed away peacefully in his sleep because of complications from Lewy body dementia and COVID-19. Seaver was a Hall of Fame pitcher, a three-time Cy Young Award winner, and a 12-time all-star. He was considered one of the greatest pitchers of all time and was referred to as "Tom Terrific" and "The Franchise." He had a career in baseball spanning almost two decades and has played with not only the New York Mets, but also with the Cincinnati Reds, Chicago White Sox, and the Boston Red Sox.

Official statement from the #Mets on the passing of Tom Seaver. #RIP41 pic.twitter.com/tWTxQWlk1o

"We are heartbroken to share that our beloved husband and father has passed away," his wife Nancy Seaver and daughters Sarah and Anne said in a statement released by the National Baseball Hall of Fame. "We send our love out to his fans, as we mourn his loss with you." The statement also listed his achievements which included 311 games that he had won, had an earned-run average of a 2.86, and struck out 3,640 batters over a major league career that spanned from 1967-1986. This earned him 12 All-Star selections. He also led the National League in wins three times, ERA three times, and strikeouts five times.

Everyone knows he was a great pitcher. But he was an even greater person. RIP to my friend Tom! pic.twitter.com/S7lRXhJ50r

"Tom Seaver’s life exemplified greatness in the game, as well as integrity, character, and sportsmanship – the ideals of a Hall of Fame career," said Jane Forbes Clark, Chairman of the National Baseball Hall of Fame and Museum. "As a longtime member of the Hall of Fame Board of Directors, Tom brought dignity and wisdom to this institution that will be deeply missed. His love for baseball history, and for the Hall of Fame, was reinforced in 2014 when he pledged the donation of his personal baseball collection to the Museum. His wonderful legacy will be preserved forever in Cooperstown."

Tim Mead, President of the National Baseball Hall of Fame and Museum stated, "Tom’s fierceness as a competitor was matched by his daily preparation and workout regimen. Intelligent, passionate, disciplined, respectful, and driven, he was as fine a pitcher as the game has seen." Seaver started his stint with the Mets as a result of a special draft lottery. The same year he earned the 1967 Rookie of the Year Award, reported NPR. "When he joined us as a rookie, he pitched like a 35-year-old," former teammate Ed Kranepool told CNN. "He had a great head on his shoulders." He also acknowledged how they became a different team when Seaver walked into the locker room in 1967.

Seaver joining the Mets was indeed a game-changer. In two years, he managed to change the team from "lovable losers" to the "Miracle Mets." The team even managed to win their first World Championship in 1969. "After their improbable World Series Championship, Tom became a household name to baseball fans – a responsibility he carried out with distinction throughout his life," MLB Commissioner Ron Manfred said. Seaver was elected to the Baseball Hall of Fame in 1992. Even in that, he managed to set a record; he was on 98.8 percent of the ballots—the highest voting percentage ever received at the time.

We mourn the passing of Tom Seaver, a Hall of Fame pitcher and World Series champion. He was 75. pic.twitter.com/KcSBQTk0rL

White Sox Chairman Jerry Reinsdorf said, "He had a fantastic sense of humor that reverberated around the clubhouse," and called Seaver "a consummate professional" and "an artist on the mound." Keith Hernandez, 66, and who was the Mets’ first baseman on that 1986 team, took to Twitter and wrote, I am deeply saddened of the passing of Tom Seaver. I had the honor of unsuccessfully hitting against him & having as a teammate. He is the greatest Met of all time. No one will ever surpass him that wears the orange & blue. My condolences to Nancy & his family. Tears.

This moment. One of the last times Mets fans were able to show Tom Seaver how much he meant to them. pic.twitter.com/U9l58gZ7Ad

Governor Andrew M. Cuomo of New York also tweeted, Tonight baseball fans and all New Yorkers mourn in unison. Tom Seaver was not only a baseball player — he was a Miracle Met who brought skill and honor to the game. The younger generations of Mets players also recognized Seaver’s legend, reported The New York Times. Former shortstop Jose Reyes, 37, wrote, The Mets have had a lot of great players in their history, but Tom Seaver was the best. RIP to a true gentleman. I didn’t know him well but we always had great talks when we saw each other.