The 74-year-old worries for the mental health of those who are struggling in quarantine. 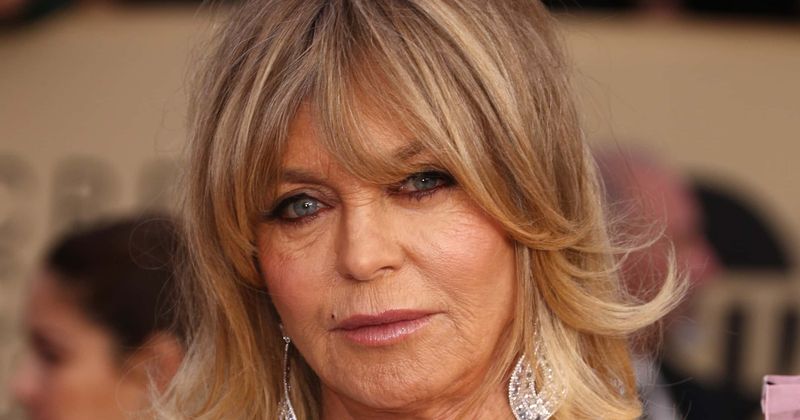 Goldie Hawn opened up about how she feels during the lockdown. The actress known for bubbly roles was feeling rather down. She admitted to having three outbursts of emotion each day as she feared for those who are in confined and troubling situations. "We're very, very lucky and I’m incredibly grateful, but what I do feel is tremendous angst, a tremendous sadness," Hawn, 74, revealed during a virtual interview on Good Morning Britain, reports TODAY.  The Oscar winner is grateful to be quarantined with her longtime love, Kurt Russell, 69, but she's concerned about the mental health of those who are struggling in quarantine. Hawn noted she felt "lucky" to have a spacious home before adding, "The people that I’m worried and concerned about are the people who are incarcerated or feel that they are in their apartments – it’s not a house, there’s no garden they can go out to."

#GoldieHawn is feeling the pain of people struggling through the coronavirus pandemic https://t.co/4AZhoKxwGs

The actress also acknowledged that she and Kurt Russell's quarantine likely looks different than most because "we are in a rarefied world, we have lovely houses and places to be, my family live very close and we do a lot of social distancing," she said. And it's not just about space, but she's also worried about the mental health of others. "I find that every day, honestly, I cry probably three times a day because it hurts me to think that there is abuse going on, there's anger going on and this all has to do with confinement, fear, uncertainty (about) what is going to happen. It’s catastrophizing," she added.

It doesn’t matter how rich she is. How big her house is. She’s feeling some sort of sadness in her heart due to drastic Change of normalcy. Fearing the unknown and knowing that so many people are also suffering from this pandemic in so many ways.

The actress, who founded MindUP, a mental health program for children, in 2003,  took to Instagram this week to start a "laughing challenge". She called laughter "the best medicine" for decreasing stress, and asked fans to share videos of themselves giggling using the hashtag #laughingchallenge. She wrote in her caption: Even in the most difficult of times, a laugh can go a long way toward making you feel better. She added: Laughter: boosts immunity, lowers stress hormones, decreases pain, relaxes your muscles, prevents heart disease, eases anxiety and tension, improves mood, strengthens resilience, draws you closer to people and strengthens relationships. Nothing works faster to bring your mind and body back into balance than a good laugh!  She also shared the responses to her challenge, and they were heartwarming.

According to the Guardian, Hawn endorsed the idea of "brain breaks" where children would learn about their brains and emotions, and how to calm and regulate them with three daily "brain breaks". This included five-minute mindfulness meditations and other proven positive psychological tactics such as keeping gratitude journals. Hawn has recorded a guided brain break, and made it available for free on the Moshi: Sleep and Mindfulness app and via the Mind Up website to help during the Covid-19 pandemic.  Hawn has other tips for staying positive in lockdown apart from brain breaks. Something as small as an act of kindness is one, and "before you go to bed, think of three things that went well today. I don’t care if it’s a little crazy thing – it doesn’t matter." And, of course, there’s dancing. "Take some music you love and if you can’t dance, go do 10 minutes of jumping jacks. Get yourself all cheered up."

Yahoo News reports the actress admitted that there were a few positive aspects of the pandemic, stating, "The positive effects of this pandemic are actually quite a few, because parents are at home with their children… the reality is that children will feel more secure and happier [being with their parents]. It’s actually an extraordinary time that we will ever get again." She's been dating actor Kurt Russell since 1983, and the two share 33-year-old son Wyatt together. Hawn is also mother to Oliver, 43, and Kate Hudson, 41, both of whom are also actors.

Goldie Hawn and long time love Kurt Russell have been partners for over three decades and recently celebrated 37 years of togetherness. The two have never tied the knot but that doesn't mean the love isn't alive. In fact, they seem more in love than many married couples! Hawn admitted that the first time she met Kurt Russell, he "had no pretense about him. I could tell right away he wasn't a womanizer." She admits the time she fell in love with him was "when I watched my kids when they’d come to the set and how he was with them," she said. "He was amazing with them. He was such a natural." She believes a long-lasting relationship needs "love, gratitude, compassion because sometimes every man or every woman will drive their partner crazy. Family. Fun. Laughs. Sex. If you don’t nurture that and remember, you’re done."